‘Cycling is not just for Dublin’: New transport campaign for rural Ireland is launched 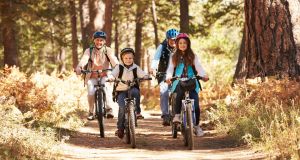 A new campaign for safe cycling in rural Ireland is being formally launched by Minister of State for Heritage Malcolm Noonan on Wednesday.

The Vision for Cycling in Rural Ireland aims to make rural towns, villages, and roads cycle-friendly for all ages, so “everyday journeys” by bike across rural Ireland are enabled and supported.

The plan has been developed by Cyclist.ie’s Rural Cycling Collective, an array of groups and individuals under the umbrella of the Cyclist.ie advocacy network.

Supporters of the plan include Jo Sachs-Eldridge, who is involved with the Leitrim Cycling Festival; Anluan Dunne of the Kerry Cycling Campaign, and Catríona Corr of Kilkenny Active Travel.

According to Dr Damien O’Tuama for Cyclist.ie, the aim is to “promote and celebrate everyday cycling in towns, villages and their surrounding areas”.

“Cycling is not just for Dublin and other cities. Our vision highlights the needs of areas outside of the major cities and the opportunity now presents itself to transform people’s experience of active travel,” he said.

Allison Roberts from the Clonakilty Bicycle Festival called for “a fair distribution of transport funding to regional parts of the country to make cycling for all ages and abilities a reality”. She said Cyclist.ie “needs to be viewed as a core stakeholder and actively encouraged to participate more fully in local authority infrastructure and design planning”.

Ms Sachs-Eldridge said that “what we want is to see changes in the way things are being done in our local authorities, we need to move from a reactive, ad hoc approach to one that is much more strategic and proactive.

“We need to change the environment on our roads – both the physical and the social environment – so that they are safer for everyone.”

“As a priority, safe cycle routes to schools and car-free zones should be introduced at school gates in all towns and villages, along with lower speed limits to make our roads and streets safer and more accessible for everyone, and to reduce casualties.”