Fire services respond after HGV overturns on N4 in Dublin 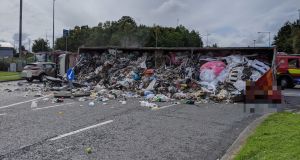 The scene on the N4 in Dublin after a HGV overturned. Photograph: Dublin Fire Brigade

There was disruption on the N4 in Dublin on Wednesday after a road traffic incident that involved a HGV overturning and a fire breaking out.

Dublin Fire Brigade responded after receiving an emergency call about a rollover collision involving a HGV and a car at the N4 Liffey Valley off-ramp at 11.22am on Wednesday.

The emergency response to the incident included three fire engines and an ambulance and involved Tallaght, Blanchardstown and Dolphin’s Barn fire stations.

Reports from the scene indicated that the HGV had rolled over and a fire had broken out.

In a statement, Dublin Fire Brigade said patients were assessed at the scene and the incident was handed over to gardaí.

Images from the scene showed waste overflowing onto the road from the HGV as it lay on its side.

Traffic diversions were in place following the incident. However, AA Roadwatch reported on Wednesday afternoon that the on- and off-ramps at J2 Liffey Valley on the N4 inbound had reopened following an earlier collision in the area.