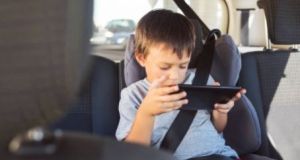 Committee on Children and Youth Affairs chairman Alan Farrell said making cyber safety part of the curriculum would go a long way towards ensuring children are consistently aware of the best way to protect themselves online. File photograph: Getty Images

The Government ’s proposed Office of Digital Safety Commissioner to protect young people from cyberbullying should be set up without delay, according to a new report from the Oireachtas Committee on Children and Youth Affairs.

The report, launched on Thursday, also called for formal cyber safety education in schools, with some teachers designated as “digital safety ambassadors”.

In a further move, the committee said the law should be changed to include “digital harassment” as part of the Non-Fatal Offences against the Person Act.

The Irish Society for the Prevention of Cruelty to Children (ISPCC) said the report “does not go far enough”. It called for statutory childcare regulations to be introduced for providers of online services, and said proposals to give the Garda powers to investigate online crimes must be implemented as a priority.

Committee on Children and Youth Affairs chairman Alan Farrell said the committee prioritised the need for measures to be put in place to protect young people online. He said the committee strongly supported the recent Government announcement that a Digital Safety Commissioner was to be appointed, “and we would like to see that process expedited”.

Mr Farrell said making cyber safety part of the curriculum would go a long way towards ensuring that children and young people are consistently aware of the best way to protect themselves online.

Speaking at the launch of the committee’s report, he said the committee also believes a national campaign regarding cyber safety is needed, in a similar vein to campaigns on road safety.

She said the committee “recommends” that social media platforms do more to strengthen their safety policies with a view to protecting their users, and this could be done in consultation with the proposed Office of the Digital Safety Commissioner.

Ms Long said, however, that “the ISPCC is of the view that this is not sufficiently robust to protect children”.

“Self-regulation of companies that provide services to children online will not be sufficient. The proposed Office of Digital Safety Commissioner must have the power to implement statutory regulation.

“We urge Government to adopt the recommendations and to go further, and require industry to adhere to statutory standards. It is imperative now that, as recommended, this office be adequately resourced, with appropriate funding and staffing, and further, with statutory powers.”