Putin will have people killed until he faces ‘devastating’ consequences, says financier 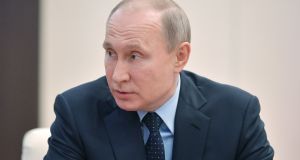 Russian president Vladimir Putin “has become the richest man in the world and has committed many heinous crimes in Russia to get that money,” said UK-based financier Bill Browder. Photograph: Alexei Druzhinin

Russian president Vladimir Putin will continue to have people killed “as he wills” until he is faced with devastating personal consequences, according to the UK-based financier Bill Browder.

He said he had no doubt but that Mr Putin had approved the attack in London on former Russian spy Sergei Skripal and his daughter Yulia. Mr Putin denies this.

Mr Browder, who successfully lobbied for the Magnitsky Act in the United States which targets high-level Russian officials and their assets, said the expulsion of diplomats is “hardly commensurate” with the use of military-grade chemical weapons in a foreign country.

The Magnitsky Act is named after a Russian lawyer Sergei Magnitsky who acted for Mr Browder and died in a Russian jail in 2009.

The lawyer was investigating a $230 million fraud against Mr Browder’s Hermitage Capital involving Russian officials but was then accused of the crime himself and arrested.

“He was tortured and killed in pre-trial detention at the age of 37,” according to a report sent to the Irish authorities this week by Hermitage. “He left a wife and two children.”

Versions of the Magnitsky Act have been introduced in the UK, Canada and the three Baltic states. Ireland was considering introducing a similar measure in 2013 but backed down after the Russian ambassador to Ireland said there would be trade consequences and a likely prohibition on the adoption of Russian babies by Irish citizens.

“I am calling for all countries to impose Magnitsky sanctions,” Mr Browder said. The measure targets President Putin’s weak point because the Russian leader “kills in Russia but keeps his money abroad”.

Mr Putin “has become the richest man in the world and has committed many heinous crimes in Russia to get that money, and it is in the West.” The money is held in the name of nominees. “The Magnitsky Act puts all of that money potentially at risk.”

The Magnitsky Act targets the perpetrators of gross human rights abuses and high level corruption. “This is Putin’s Achilles heel. He can only be savage up to a point, which is the point at which his money is at risk.”

Mr Browder, one of Mr Putin’s best-known critics in the West, said he was in touch with members of the Oireachtas about a renewed effort to have a Magnitsky-type measure introduced here.

The ongoing campaign to follow where the money from the Hermitage tax fraud went has, Mr Browder said, uncovered a “pipeline” that is used to move massive amounts of money to the west on behalf of Russia criminals.

The campaign to locate the money has led to civil and criminal proceedings in the US, France, Spain, Switzerland and other jurisdictions.

Hermitage Capital has now sent a report on suspected money laundering involving Irish bank accounts to Garda Headquarters and to the Director of Public Prosecutions saying that a thorough investigation of the material was plainly in the public interest.

The report, which has been seen by The Irish Times, details how transactions involving the Lithuanian bank account of a British Virgin Islands company called Sonafin Commercial Company Ltd, include apparent transfers between that account and accounts in the Bank of Ireland and AIB.

The Lithuanian authorities are conducting a criminal inquiry into the Sonafin account and Hermitage Capital, as the affected party in the suspected crime, has access to the documentation.

The report also documents a payment of €270,000 in July 2009 from the Estonian bank account of British Virgin Islands company Everfront Sales LLP, to the AIB account of a company in Montenegro called Celtic Properties DOO.

The payment was apparently for an apartment in Przno, in the Budva Riviera. Celtic Properties is an apartment development venture set up by Cork businessmen Vincent and the late Jerry Coughlan in Montenegro.

Efforts to contact Mr Coughlan, of Ballydehob, Co Cork, were unsuccessful. There is no suggestion intended that there would be anything illegal or improper in the apartment sale.