Cull of Killarney deer over link to fatal car crashes 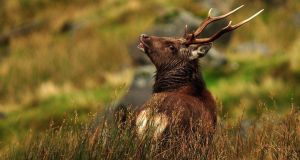 The cull next month will include lowland red deer, the unique species native to Killarney, as well as the smaller Sika. Photograph: Wild Deer Association of Ireland

The National Parks and Wildlife Service is to carry out a cull of lowland deer around Killarney amid an outcry about a rise in the number of deer blamed for fatal car crashes.

However, the service has rejected call from motorists and local politicians to fence off sections of the Killarney National Park to prevent deer emerging in front of drivers.

The cull next month will include lowland red deer, the unique species native to Killarney, as well as the smaller Sika, which were introduced here in the 19th century. The cull will begin as soon as the rut or mating season finishes, a spokesman said. Numbers of deer have increased, the NPWS confirms, but it has no numbers and does not have the resources to count them.

The coroner for Kerry South, Terence Casey, has called for sections of the park, particularly where parks and wildlife service woodland comes to the edge of busy roadways such as the N72 near Killarney, to be fenced off.

Swerving to avoid deer has been linked to crashes into trees. An inquest last year heard how there had been several incidents with deer and a number of fatal crash investigations had noted traces of deer on vehicles.

Councillors in Kerry claimed recently the deer were “out of control” and collisions with cars were numerous. People are said not to be bothering to report collisions because, unlike the case with a domesticated animal, there is no comeback in cases involving wild animals.

The NPWS has rejected fencing off sections of the park. It said the presence of deer was not confined to the park and fencing off 10,000 hectares of the whole park would “serve no practical purpose” and be “an enormous task”.

Amid speculation that deer numbers, particularly Sika, have hugely increased, the NPWS says it does not have the resources to carry out a deer census. “Sika deer numbers are not out of control in the park and are at much lower densities than can be found in Wicklow. However, the NPWS would like to further reduce the numbers of this non-native species.

“Red deer numbers have not significantly increased in the uplands of KNP [Killarney National Park]. However, lowland numbers have increased and these deer are very visible. It is intended to commence culling this population in November once the rut has finished.”