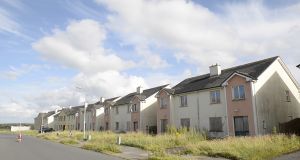 The CSO said more than 4,600 enumerators were involved in collecting census data from every house in the country, and they recorded vacant dwellings in their area using “detailed methodology applied consistently over the past three consecutive Censuses”. File photograph: Enda O’Dowd

The Central Statistics Office (CSO) has stood over its Census 2016 finding that there were more than 183,000 vacant dwellings in the Republic.

In a statement, the CSO said it was confident its “vacant dwelling figures are robust as a point-in-time record around the 24th of April 2016”.

The CSO was responding to a study conducted by Fingal County Council which concluded the number of vacant domestic dwellings in its area was far lower than suggested by the CSO.

The CSO said that more than 4,600 enumerators were involved in collecting census data from every house in the country, and they recorded vacant dwellings in their area using “detailed methodology applied consistently over the past three consecutive Censuses”.

The other main source of data on vacant dwellings is the GeoDirectory, a joint initiative between An Post and Ordnance Survey Ireland, which provides an estimate of the vacant stock at any point of time.

There is a large discrepancy between the figures from last year’s Census and the June 2017 GeoDirectory figures, which showed 96,000 dwellings vacant, a little over half of the 2016 CSO figure. The Fingal study suggested the actual figure in its area was lower than the GeoDirectory count.

Another Dublin local authority, South Dublin County Council, has said early indications were that the “actual figure differs to that of the GeoDirectory” in its area.

Dublin City Council commented: “We are of the view that many of the ‘vacancies’ identified by the census are not vacant or available, but even if the true figure is significantly less, we will be doing our best (including using compulsory purchase orders where appropriate) to getting them back into residential use.”

In supplementary analysis on its vacant home figures in the 2016 Census, the CSO said its enumerators were instructed to speak to neighbours to determine the status of vacant dwellings, and also look for indicators such as For Sale signs.

Notes that could be categorised were made for about 57,000 properties while the remaining 126,000 were mainly left blank. Accepting the notes were of mixed quality, the CSO found that of the 57,000 properties, about one-fifth were for sale, one-fifth for rent, and one-fifth vacant long term. Other notable reasons for vacancy was that the occupants were in nursing homes, the house was being renovated, or it was a new-build property.

In a recent analysis of the discrepancy with the GeoDirectory, economic consultants DKM suggested some of the CSO categories could be “construed as dwellings which might not normally be classified as vacant in the context of vacant long-term, but would represent more of a transition or temporary vacancy rate”.

The CSO’s own detailed analysis suggests the number of vacant dwellings is low in Dublin, where housing demand is highest, and highest in areas of the country where there is less demand for housing, such as Leitrim, Roscommon and Longford. The two towns with the highest number of vacant dwellings were Blacklion, Co Cavan (46 per cent); and Keshcarrigan, Co Leitrim (45 per cent).