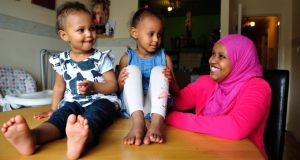 Somali speaker Iftina Abdule with her daughters Isra (3) and Ishraq (15 months) in her home in Blanchardstown, Dublin. Photograph: Aidan Crawley 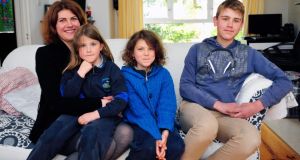 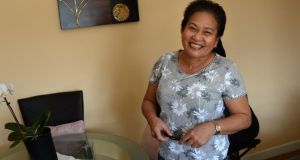 Annabelle de Gracia from the Philippines, who has lived in Ireland for 13 years. Photograph: Dara Mac Donaill

Bonjour, kedu, xin chào . . . more than one in 10 people in Ireland speak a language other than Irish or English at home, with the diversity of language speakers differing greatly depending on where you live.

The Irish Times has analysed the spread of people whose first language is not English or Irish across the counties and in Dublin’s four council areas based on data from the Central Statistics Office.

It found that Fingal in north Dublin has the highest percentage of non-native language speakers in the country.

More than a fifth of those living in Fingal speak a non-native language at home, with Polish, French and Lithuanian the most commonly spoken first languages in the State.

The least linguistically diverse county is Donegal, where just one in 20 people speak a non-native language as their mother tongue.

Unsurprisingly, Polish was the most commonly recorded language among non-native speakers in all but one county and Dublin council area in the 2011 census, the exception being Dún Laoghaire-Rathdown, where it was French.

French is the next most common first language, spoken by 56,430 people nationwide, followed by 31,635 people whose mother tongue is Lithuanian.

Some lesser-known languages also feature: Shona – a Niger- Congo language and the principal language of Zimbabwe – is the first language of more than 1,000 people.

A similar number speak Akan, a language principally used in Ghana and the Ivory Coast.

The 2011 census, which for the first time asked a question on language other than Irish or English, recorded a total of 182 different languages spoken across the State.

However, Dr Lorna Carson, assistant professor in applied linguistics at Trinity College Dublin, says at least 200 languages are spoken in Dublin, although many “remain invisible”.

“We don’t see them and if we hear them we’re not necessarily able to distinguish them from each other,” she said.

According to Dr Carson’s research on multilingualism in Dublin, between 2002 and 2011 there was a 143 per cent increase in foreign nationals living in Ireland. By 2011, foreign nationals represented 12 per cent of the overall population, coming from 199 countries.

She warns the Government has not made a sustained effort to encourage the development of foreign languages in Ireland.

“Speaking foreign languages is seen as threatening to some and a form of aggression. These languages will disappear within two generations if we do nothing. They will be gone within 20 years. It’s about seeing language diversity not as a deficiency but as a resource.”

According to Dr Carson, a quarter of people with a foreign first language were born in the Republic. Even though many of these children may speak English to their parents, linguistic diversity must be encouraged from an early age, she says.

“From a linguistic perspective, a child is a sponge and can manage as many languages as she or he speaks and listens to,” she says.

Dr Carson highlights the numerous benefits of multilingualism, which include higher scores in mathematics, a more creative mind and safeguarding against Alzheimer’s disease.

“We’re a small island, we’re outward-looking, the more languages there are the richer our lives. We need that attitude shift.”

Deirdre Kirwan is principal in Scoil Bhríde primary school in Blanchardstown, Dublin, where 80 per cent of students have a foreign background and speak a total of 51 languages. The school encourages parents and students to embrace their native linguistic skills alongside English and Irish.

“It is so important that a child’s first language is maintained and developed. It’s the language they have grown up with. It informs their self-concept and self-awareness and informs how they think,” she says.

“If we allow people to express themselves in terms of their language, their cultural heritage, it helps create social cohesion rather than creating dissonance.”

One of the unanticipated results of Scoil Bhríde’s linguistic diversity is that indigenous Irish students are more aware of their Irish-language skills.

“They see other children communicating in more than one language and want to be able to do that too. It’s raised the status of Irish as a language,” says Dr Kirwan.

She says the development of multilingualism in Ireland is an opportunity for native Irish people to build on their own language skills.

Somali – ‘I have to learn this language if I want to communicate. If not I’ll have to be silent’

Iftina Abdule travelled to Ireland alone from Somalia in October 2007, when she was just 15. She spent the first few years living in a hostel with other underage asylum seekers before receiving her refugee status.

While at the hostel she began to learn English and to study for her Leaving Cert. She already spoke Somali, her native language, and Swahili, and within six months she was comfortable speaking English.

“It was so exciting to learn English but the other girls, they weren’t interested,” she says. “I said: ‘I have to learn this language if I want to communicate. If not I’ll have to be silent.’”

Iftina found life in Ireland lonely at first and was relieved when she tracked down her father, who was living in Belgium. He has since moved to Ireland to be with his daughter. Iftina is now married with three young children. Her husband, Ahmed, who is also from Somalia, came to Ireland with his family in 1997.

“I knew how to say yes and no when I arrived,” he says.

“I learned English in one year just watching The Simpsons.”

When his family first arrived in the 1990s, Ahmed says, people would often stop and stare when they walked down the street.

“That mentality has changed, it’s different now. I think it depends on you, how you integrate and socialise.

“If you just keep to yourself you’re not going to integrate with the people.”

Iftina believes it’s important her two daughters, Isra and Ishraq, and son Dawdu grow up bilingual in Somali and English.

“When they are young they can learn more languages. They can still learn four different languages. I will tell them: ‘Speak my language, which is also your language, to me and then in school you can chat in English with your friends.’”

It’s important to Iftina that her children grow up with an understanding of where their parents and families came from.

“I would like if we could get some sort of Somali community together so the kids who are born here can learn. Otherwise later on they won’t be able to talk about their own culture.”

Annabelle de Gracia left her three children and husband in the Philippines 13 years ago in the hope of finding work and a better salary halfway across the world in Ireland.

“It was very difficult for me to come here and leave my children. I just closed my eyes and thought: ‘I will be going to nowhere and without any guarantee that I will be safe.’ It was for the future of my children.

“I sent all my salary home because at the time they were still in school. My husband was also jobless.”

Before leaving the Philippines, Annabelle, who has a degree in banking and finance, worked in commerce.

When she arrived in Ireland she began working at the Shelbourne Hotel and now works in a nursing home in Killester, Dublin.

Her husband followed her to Ireland nine years ago, and her 17-year-old daughter finally made it over two months ago.

“When she arrived she was too shy to speak. For a month I could not let her even go down and buy bits and pieces in the shop because she was afraid to talk to the man on the till.”

Annabelle speaks English at home even though her daughter prefers to speak Bisaya, the family’s native language.

“I know that English is a universal language and she has to learn. If she travels to other countries it won’t be hard for her to adjust if she has English. That is very, very important.”

Annabelle says she feels distant from her youngest daughter, whom she left in the Philippines as a four-year-old.

“When she arrived there was a detachment between us because she always talked to her older sister. Her older sister was the one who minded her when she was a kid.”

Annabelle, who was awarded Irish citizenship in 2012, speaks in Tagalog, the native language of the Philippines, when she meets other Filipinos living in Dublin.

“Everyone in the Philippines speaks two or three languages,” she says. “If you know three or more languages your brain is much smarter, you can easily catch up with what people are talking about and remember it.”

Polish – ‘When I speak Polish to my daughter she speaks two words in Polish, two in English’

Szymon Misiaszek says he hopes to travel the world when he finishes school. The 14- year-old, who was born in Wroclaw in Poland, already speaks fluent Polish and English and is learning Irish and French in school.

“I’d like to learn Italian too. Just some other languages which would allow me to travel around the world and speak differently to other people.”

Szymon’s two younger sisters, Helen and Hannah, were born in Ireland and speak English with their friends. However, their mother, Barbara, is eager for the family to continue speaking Polish at home.

“We have family in Poland who don’t speak English,” she says. “It’s our language.”

Barbara Klimecka-Misiaszek followed her husband to Ireland with Szymon in December 2006, six months after he had left their home looking for work abroad.

She says it was overwhelming when she first arrived without a word of English but, over time, she has picked up the language.

Szymon didn’t speak English when he arrived, but as a four-year-old he quickly picked up the local language.

“I didn’t speak any English at first and was miming everything,” he says. “When I started going to school, our teachers put on movies in English. Then I heard the words people were saying and I began to speak. It all just came to me.”

Although the family speaks Polish at home, Szymon worries that his ability to read and write in Polish is suffering.

“I want and need to know how to write and read and speak Polish. I need to know because I was born there and my family is from there,” he says. “Sometimes it’s harder than reading English. I’d rather read English books because it’s easier for me.”

Barbara worries about her youngest child, five-year-old Hannah, who plays with English-speaking children only and struggles to speak Polish.

“The problem with Hannah is she mixes English with Polish,” she says. “When you speak pure Polish to her she speaks two words in Polish and two words in English. Next year I would like to start teaching her Polish grammar.”