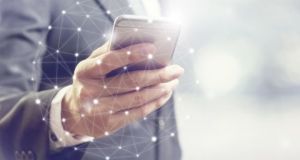 A spokesman for the Data Protection Commission said its position had not changed. Photograph: iStock

The Central Statistics Office (CSO) has confirmed it is continuing to explore the possibility of obtaining roaming data from mobile network operators to enable it to prepare better statistics on tourism.

The statistics agency has been in correspondence with the Data Protection Commission on the matter for many years and that office has previously told it that the project would be a “serious interference with people’s privacy rights”.

In correspondence to the CSO, the commission has said there could be adverse consequences if tourists were to find out that their movements were being tracked while on holidays here, The Irish Times reported over a year ago.

Asked for an update on the project, the statistics body said the project was “still in an exploratory phase as we investigate solutions to restrict data to the limited scope of what is required for statistical purposes only”.

“The CSO is committed to improving the quality of tourism statistics for Ireland and believes that suitably anonymised mobile phone data offers great potential in this regard,” it said in a statement.

“Our priority is wholly respecting data protection legislation and guaranteeing the highest level of data security. The office will continue to liaise with mobile network operators and the Data Protection Commission as relevant, while planning in this regard continues.”

The CSO has tried in the past to use its powers under the Statistics Act to compel the mobile operators to transfer to it on an ongoing basis the details of phones or users roaming on the networks, as well as the dates and times of their calls. It dropped plans to seek data on Irish users roaming abroad.

It said in July last year it was “in the process of developing an innovative technical solution in which anonymised mobile phone location information can be used to address significant knowledge gaps in tourism data”.

The CSO says about 80 per cent of all visitors to Ireland come into the country via Dublin airport. It carries out some paper surveys at the airport to determine where visitors are going and where they are from, but once they leave the airport; there is very little statistical data available on where they go next.

In a video about the project published online in June, the statistics agency said that to identify a solution which “guarantees individual privacy at all times” it has worked closely with the office of the Data Protection Commission and the mobile network operators.

The commission says that, in some cases, “even a broad indication of location may be enough to accurately identify a person” when they carry a smartphone.

Torlach Denihan, director of the Telecommunications and Internet Federation (TIF), representing the electronic communications industry, said: “The CSO has engaged with the mobile phone operators through TIF on this matter. No data has been provided to the CSO.”

A spokesman for the Data Protection Commission said its position had not changed.