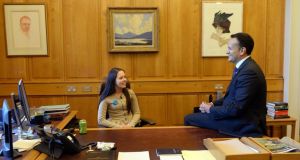 An Irish teenager ‘took over’ Taoiseach Leo Varadkar’s office to call for young people to be given a say in decision-making on important issues affecting them into the future.

Aoife Murphy from Delvin, Co Westmeath, represented the voice of young people all over Ireland when she met Mr Varadkar ahead of Unicef’s World Children’s Day on Tuesday.

Ms Murphy won the Unicef #KidsTakeOver competition for her campaign to lower the voting age to 16 and she spent Monday with Mr Varadkar to highlight why young people deserve to have a say in decisions that affect their future.

As part of the worldwide initiative, children will take over key roles in media, politics, business, sport and entertainment for a day to express their views about what global leaders should be focusing on.

This year Aoife has been running a campaign in her school, Eureka Secondary School in Kells, and in her community, to give young people a voice in their future and to advocate for change in the voting age.

“Young people are facing great challenges like climate change, inequality and unemployment. We want to play our part in deciding who is making the decisions, that ultimately will have a far greater impact on our generation than theirs. It is our future – we deserve our say,” Aoife added.

Mr Varadkar said Aoife and her peers were the next generation of leaders and it was important to listen to them and take their ideas seriously.

“Aoife is a bright, enthusiastic and passionate young woman and she put across her opinions in very clearly and articulately. I have no doubt she has a bright future ahead.”

Unicef Ireland executive director Peter Power said: “World Children’s Day is a celebration of children all over the world and of all the progress we have made on children’s rights, but it is also an opportunity to raise awareness about the issues faced by children both at home in Ireland and around the world.”

World Children’s Day is marked each year on November 20th and marks the anniversary of the adoption of the Convention on the Rights of the Child.

Unicef has invited the public sign its global petition online asking for leaders to commit to fulfilling the rights of every child.