Covid crisis: Ban on passenger travel from Britain likely to be extended

Freight operators warn of ‘serious consequences’ for transport of supplies

A Britain travel ban has disrupted the Christmas holiday plans of tens of thousands of Irish citizens. Video: Reuters/ RTE 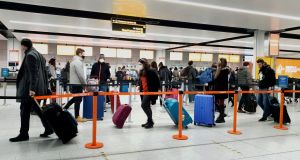 The ban, which came into force at midnight, caused travel chaos in Britain, disrupting the travel plans of large numbers of Irish emigrants hoping to return for Christmas. Photograph: PA

An unprecedented 48-hour ban on passenger travel from Britain is likely to be extended by the Government beyond Tuesday, as fears grow over the spread of a more infectious strain of Covid-19.

European Union member states will hold a crisis meeting on Monday to co-ordinate their response to the new variant, which is 70 per cent more transmissible than other strains. The meeting was called after Ireland and other European countries imposed tough restrictions on travel from Britain aimed at stopping the spread of the variant.

The ban, which came into force at midnight, caused travel chaos in Britain, disrupting the travel plans of large numbers of Irish emigrants hoping to return for Christmas.

And with France also banning all road travel from Britain, including essential freight, importers warned the restrictions could hit the supply of essential goods to Ireland from mainland Europe.

Aidan Flynn, general manager of the Freight Transport Association, spoke of a “perfect storm” with Covid-19, pre-Brexit stockpiling and Christmas supplies falling at the same time.

Warning of “serious consequences” for the transport of supplies to the State from mainland Europe across Britain, he said Irish truckers would be left stranded on both sides of the English Channel now that the key UK “landbridge” transit route to and from continental Europe had been “compromised”.

The Government imposed the ban for 48 hours as a stopgap measure pending consideration at Cabinet on Tuesday, when proposals to tighten up domestic Covid-19 restrictions will also be considered.

The more infectious strain, which has spread rapidly in London and southeast England since it appeared last September, has not been identified here to date.

Minister for Transport Eamon Ryan said it was not known whether the recent sharp increase in cases in Ireland had any link to the mutation of the virus.

“I think realistically it is hard to see that things are going to change in the next few days . . . There is not a high probability that we would be returning to a schedule of flights straight away.”

Ferries will still operate for haulage and flights will be organised to repatriate Irish people stranded abroad. In relation to travel between the Republic and Northern Ireland, Mr Ryan said there were no immediate consequences for Border crossings.

Ministers in the North held a late-night meeting to discuss concerns over the new strain.

Meanwhile, the Government may need to rethink the strategy of living with Covid-19 if the variant spreads here, according to one infectious-disease consultant. Prof Paddy Mallon said rolling cycles of restrictions and relaxations of measures may not work if the virus spreads more rapidly.

The European Centre for Disease Prevention and Control (ECDC) said UK analysis suggested the variant is “significantly more transmissible” than other variants and could increase the reproductive number by 0.4.

However, “there is no indication at this point of increased infection severity associated with the new variant”.

The ECDC called for “timely efforts” to prevent and control the spread, including “the avoidance of non-essential travel and social activities”.

Meanwhile, the Republic reported the highest number of daily cases in almost eight weeks on Sunday, at 764. There were four deaths.

All indicators of Covid-19 spread are worsening, more quickly than public-health officials expected, chief medical officer Dr Tony Holohan, warned. As a result, officials fear a spike in case among vulnerable over-65s during the Christmas period.

In the UK, health secretary Matt Hancock admitted the virus was out of control.