Covid-19: State staff must use unpaid leave to isolate after overseas holidays 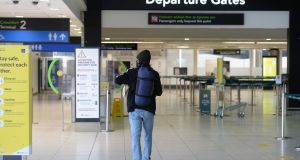 Responsibility for the quarantine period arising from non-essential travel overseas is a matter for each employee, according to the Department of Public Expenditure and Reform. Photograph: Alan Betson

Nearly 340,000 staff across the public service have been told that if they engage in non-essential travel abroad, they will effectively have to make provisions to restrict their movements on return to Ireland at their own expense.

In new guidance issued on Wednesday to public service organisations, the Department of Public Expenditure and Reform said any personnel concerned would have either to use up any remaining holidays they are due or apply for unpaid leave to cover the period of restricted movement.

The department said Irish authorities had advised against all non-essential travel overseas until further notice. It said this included travel to Great Britain but did not apply to Northern Ireland. It said the advice also covered all travel by cruise ship.

“The Irish authorities require anyone coming into Ireland, apart from Northern Ireland, to restrict their movements for 14 days. Responsibility to provide for the period of restricted movement arising from non-essential travel overseas is a matter for each individual employee.

“Where there is an intention to undertake non-essential travel overseas, all employees must make provision by way of an annual leave or unpaid leave application for the additional period of restricted movement, in line with the normal rules applying in the relevant sector.”

The Department of Public Expenditure and Reform also suggested that staff across the public service would have to advise their employer of travel abroad. The department said this would be “necessary for the protection of public health”.

A spokesman for Fórsa, the country’s largest public service trade union, said the new Department of Public Expenditure guidance did not come as a surprise, “since the official National Public Health Emergency Team advice is that everyone should avoid non-essential overseas travel, regardless of where they work”.