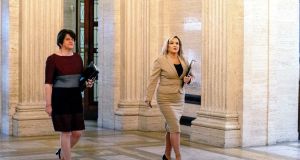 The devolved institutions in Northern Ireland need more financial support from the British government to implement the reforms that saw the Executive restored in January, a cross-party group of MPs has warned. In a report published on Thursday, the Northern Ireland Affairs Committee says the £2 billion funding agreed as part of the New Decade, New Approach agreement is inadequate, particularly in light of coronavirus.

It calls for stronger links between the Assembly and other legislatures, including the Oireachtas, and for the merits of an academic fellowship scheme to be considered. Stormont is the only legislature in the United Kingdom not to have such a scheme, which brings academics in to work on specific projects.

The report says both the British and Irish governments should view New Decade, New Approach not as a static scheme but as a framework for fostering dynamic and stable devolved government.

The agreement was intended to transform public service provision in Northern Ireland and it links the funding of public services to the stability of devolution, so that if the Executive falls, the funding stops. A financial package was targeted at supporting the health service, reforming the essential public services of health, education and justice, speeding up delivery of infrastructure and supporting community and reconciliation initiatives.

But the report concludes that £2 billion is not enough to meet the agreement’s objectives, particularly as coronavirus has put the Executive’s finances under greater strain.

Simon Hoare, the committee’s Conservative chairman, said meeting the commitments enshrined in New Decade, New Approach is the only way to restore trust in the devolution settlement and its ability to deliver for the people of Northern Ireland.

“All parties, the Executive, UK government and Irish Government must work constructively to meet their commitments to forge a better future for Northern Ireland and to nurture healthy devolved governance. The UK government must provide a realistic and long-term financial plan that recognises the challenges imposed by coronavirus,” he said.

“No amount of money will make [New Decade, New Approach] work without the development of a more productive working culture at Stormont. To restore trust, the implementation of [the agreement] will require regular monitoring and review. New Decade, New Approach should bring people together to deliver. There should be no excuses for failure. We cannot sleepwalk into another Executive collapse, because the people of Northern Ireland deserve more.”