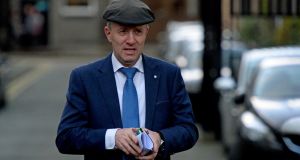 Independent TD Michael Healy-Rae has said he does not believe it is the job of shopkeepers to enforce the wearing of face coverings in their outlets. File photograph: Cyril Byrne/The Irish Times.

Independent TD Michael Healy-Rae has said he does not believe it is the job of shopkeepers to enforce the wearing of face coverings in their outlets.

The Kerry deputy said he would be prepared to point out signs in his shop saying that masks are mandatory, but would not refuse people not wearing coverings entry to the store.

“A little gentle reminder is ok,” he told Newstalk’s Pat Kenny show on Tuesday. “We are not going to be at the door saying you can’t come in, but we are highly recommending to people that they do obey.”

Regulations making face coverings mandatory in shops and other indoor public settings such as hairdressers and museums came into force on Monday.

Similar to the regulations requiring people to wear face masks on public transport, those in breach of the rules can be fined up to €2,500 or face six months imprisonment.

Mr Healy-Rae, who operates a petrol station and supermarket in Kilgarvan, said he believed it was right that members of the public had been asked to wear coverings.

“If you forgot you’d be embarrassed, by seeing everyone else complying you’d be reminded,” he said.

“We all make mistakes, so I would take no notice of someone not complying, but only the once. I would not like repeat offenders. We all want to do our best.

“But I really don’t believe it’s the place of shopkeepers to enforce. I want to make my shop attractive, I don’t want to have a heavy hand.”

Mr Healy-Rae said he wanted to thank staff in shops across the country - who had two jobs to do - protect themselves and their customers.

Wearing a mask was for the public good, he said, and he had no problem complying himself.

It was important to be positive, he added, and the day would come when people could be within 2m of each other again.