Coveney says Ireland may send another ship to the Mediterranean 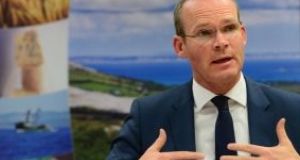 The Government may send another Naval Service ship to the Mediterranean early next year to assist with the ongoing refugee crisis after the LE Samuel Beckett completes its current tour of duty later this month, according to Minister for Defence, Simon Coveney.

The Government may send another Naval Service ship to the Mediterranean early next year to assist with the ongoing refugee crisis after the LE Samuel Beckett completes its current tour of duty later this month, according to Minister for Defence, Simon Coveney.

“I would be expecting to send a ship out at the end of February/early March next year - that would be the expectation but obviously that will be a government decision and in all likelihood it will be a new government at that stage,” he said.

Mr Coveney said that no decision had been taken yet by the Government on whether to deploy Irish troops to replace French troops on United Nations missions in both Mali and South Lebanon where Ireland already have personnel deployed.

France had requested assistance from other EU countries to offer troops to replace French peacekeepers so that it could withdraw soldiers from UN missions and bring them back to France to deal with the security threat in the wake of the Paris attacks.

Mr Coveney said that he had met with Chief of Staff, Rear Admiral Mark Mellett and he was currently finalising an assessment of the options with regard to sending Irish troops to Mali where Ireland currently has ten personnel involved in training Malian forces.

“Obviously I want to take military advice in terms of managing risk and so on - I am not going to send Irish troops to parts of the world unless we fully understand -all the risks that are there,” said Mr Coveney, adding that some 20 European countries currently have troops in Mali

“Mali is a very complex country at the moment so we need to look at where Ireland eventually fits in or if it fits in — we already have ten there training so I am not going to rush this decision, that would be foolish to do it — we will make the decision and I will bring a recommendation to government.”

He said he was going to South Lebanon later this month to inspect Irish troops currently serving at the UN Interim Force in Lebanon and the UN Disengagement Observer Force and the government would be in a position to decide on the French request for relief troops after that.