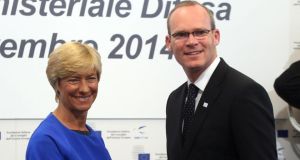 Minister for Defence Simon Coveney has expressed confidence the United Nations will make changes to its peacekeeping mission to the Golan Heights.

Mr Coveney said the changes would allow Ireland to continue to deploy troops there when the current rotation concluded at the end of the month.

He said he met with the UN head of peacekeeping operations, Herve Ladsous, at a meeting of EU defence ministers in Italy earlier this week.

Mr Coveney said he had spoken to Mr Ladsous in detail about what was required to secure Ireland’s continued participation in Golan.

“ I have made it very clear to him that we want to be helpful to the UN, we recognise that Ireland has a pivotal role to play in that mission and we would like to stay in the UNDOF mission in the Golan Heights,” he said.

“But I also made it clear to him that we will not stay if the UN do not make the necessary structural changes to the mission to adapt to the new realities on the ground so that we can be reassured on the management of risk in the mission.

“It was a very constructive meeting, we looked in detail at the maps of the UNDOF mission, where the UN posts are, the kind of alterations that could be made to reduce risk for UN peacekeepers given all that has happened over the past 10 days.”

He said he would seek a decision by the council that could give Ireland the reassurance the Government need in terms of the risk levels of that mission.

Mr Coveney said he would attend an international peace keeping summit in New York on September 26th, which was organised by US vice president Joe Biden.

Mr Coveney said he was focused on getting a decision on structural changes to allow the Government decide on further Irish deployment.

The United States and the UK were hugely supportive of the UNDOF mission staying intact on the Golan Heights and of Ireland’s continued involvement.

He said both countries were anxious to be as helpful as possible to ensure Ireland’s continued involvement.

“There is a reason why the big players in the region want UNDOF to stay intact. The last thing the Middle East needs now is new tension and friction between Syria and Israel. That UNDOF mission has been an extraordinary success story since the mid 1970s,” Mr Coveney said.

“It has maintained a largely peaceful border between two countries that had been at war and there are lots of reasons why it is important that the UNDOF mission remains intact but certainly the way in which it is structured, clearly that is going to be revised now.”

“This is something that we will take advice on from our lead officer on the ground, Paul Kennedy, in Golan who is working with the UN commander on the ground to look at the recommendations they will make to the UN about sensible structural change.”

Mr Coveney said among the structural changes sought by Ireland would be an examination of the number of UN posts in the 80km strip of land that divides Israel and Syria and the viability of some these, which have have to be abandoned because they are now in an area of active civil war in Syria.

“I’ll get a series of recommendations from the ground in the UN through our team there and on the back of that we will continue to work with the UN to continue to change the structure of the mission in a way that satisfies our Defence Forces that I can recommend to Government that we should stay.”

Mr Coveney said he had met with his Dutch counterpart, Jeanine Hennis-Plasschaert at the EU meeting of defence ministers and the Dutch, who have two officers in the UNDOF mission, agreed with the Irish position with regard to changes to reduce the risk.

Election 2020: Voters must register by close of business on Wednesday 10:47
Man (23) doused in petrol and set on fire in Cork attack 10:38
Election 2020: Fine Gael and Fianna Fáil set to reveal spending plans worth billions 09:37
Man (30) attacked with hammer and baseball bat in Cork city 06:41
Over 200 gardaí begin cybercrime training to speed up online child abuse investigations 02:45