Coveney and Varadkar tally up, but Taoiseach still in control

Analysis: Kenny sits atop the steaming pot; ambition, restlessness and loyalty stew below 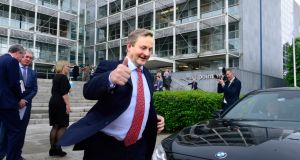 “In truth, those closest to the Taoiseach say only two people know exactly what is going to happen: Kenny and his wife Fionnuala.” Photograph: Cyril Byrne

There is a famous political cartoon of William Howard Taft, inspired by a quote from his once best friend and later deadly political enemy, the swashbuckling Theodore Roosevelt.

When he was US president, Roosevelt remarked while away from Washington that he had left Taft in the capital “sitting on the lid”, holding down the nation’s problems.

The 1905 cartoon in the Washington Times took its cue from Rough Rider Teddy and showed the portly Taft – who would himself succeed Roosevelt as president – atop a pot with the steam of troubles such as Venezuela and the Panama Canal wafting out as it reached the boil.

This week, Enda Kenny sits atop the steaming pot of his own party, with ambition, restlessness, loyalty and statesmanship rising from the stew below.

TDs made repeated calls to each other yesterday attempting the impossible task of divining the Taoiseach’s thoughts. In truth, those closest to the Taoiseach say only two people know exactly what is going to happen: Kenny and his wife Fionnuala.

Yet, after saying last week that he will address his leadership at tomorrow’s parliamentary party meeting, expectation is rampant within Fine Gael that the long-awaited contest to succeed Kenny will start this week.

Some feel that Kenny will want to maintain the element of surprise and expect an announcement anytime from today onwards, with idle speculation that the weekly party meeting could be brought forward from its usual Wednesday evening slot.

The campaigns of the two leading contenders are in full swing, with lists of TDs, senators and MEPs drawn up by those working for Leo Varadkar and Simon Coveney.

Sources in Coveney’s camp say the position of 10 members of the parliamentary party cannot be ascertained. Senior figures such as Enda Kenny and Michael Noonan are viewed as being likely to support Coveney but one source said some “conversations” soliciting votes from the highest levels of the party had not yet taken place.

They maintain their voters are the TDs who will not shout their support, but will quietly row in behind their man.

Those in the Varadkar camp, unsurprisingly, say these calculations are wildly optimistic, but they say there are “at most” 15 people in the middle who have yet to say who they will support or have not made up their minds.

“They started saying they had the Cabinet, he didn’t,” one Varadkar supporter said of Coveney’s supporters. “They said he had the senators, they didn’t. They keep changing the goalposts.”

Another note of difference centres on opinion polling carried out by Coveney’s director of elections Damien English in places such as Cavan-Monaghan, Clare, Laois, Offaly and Wexford – constituencies where it is believed a local TD, senator or councillor’s vote is up for grabs – on who is the more likely vote getter in a general election between the two leading candidates.

English has used his polls in an effort to convince people to support Coveney and stands over his data and methodology.

“These polls, conducted by experienced people I have used for over 15 years, confirm our conviction that Simon will help the party and candidates win more votes in the next local or national election,” the Meath West TD said.

“The results show a consistent pattern and are very similar to national polls which showed Simon clearly ahead with Fine Gael leaning voters. I would not be asking colleagues to support Simon Coveney unless I was sure that he could win the party extra votes and extra seats.”

“To call these things polls – even to debate their accuracy – is like writing the word ‘computer’ on a piece of paper and claiming it is a computer,” a TD said.

Despite the protestations that there is no vacancy yet, the pot is boiling under Kenny. It is up to him when he climbs down from the steam.