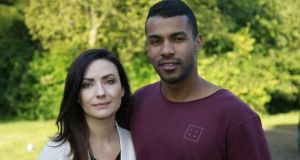 A mixed-race Co Meath couple who appeared in an ad campaign for supermarket chain Lidl has decided to leave Ireland after being subjected to abuse online and receiving a death threat.

Fiona Ryan (33), her fiancé Jonathan Mathis (32) and their 22-month-old son featured in a television and billboard campaign for supermarket chain Lidl. The billboard ad featuring their photograph began appearing in early September.

The couple said last night they made the decision after receiving abusive and racist comments online and also a death threat.

They had previously expressed frustration that gardaí were not taking their fears for their safety seriously and claimed the Government was “100 per cent accountable” due to its failure to enact robust hate-crime legislation.

Ms Ryan told RTÉ’s Late Late Show on Friday night the couple decided to move to England “because last week we received a death threat. So it gets a bit scary”.

She said the threat was also directed at their 22-month-old son. “They are talking about harming and death to my partner and my child so I am not going to stay in a country [where] this is allowed.”

Mr Mathis added he was disappointed by the response of the social media companies which had hosted the comments.

“These huge platforms, these social media platforms, they are not doing what they should be doing to protect their users,” Mr Mathis said.

Ms Ryan said knowing what type of comments were on these platforms was stressful.

“It was all over Facebook and Twitter, people were trying to get into our accounts . . . just saying whatever they want.”

During the programme presenter Ryan Tubridy read out a comment about the couple posted on Twitter by former journalist Gemma O’Doherty on September 7th.

“German dump @lidl_ireland gaslighting the Irish people with their multicultural version of ‘The Ryans’. Kidding no-one! Resist the Great Replacement wherever you can by giving this kip a wide berth. #ShopIrish #BuyIrish.”

Several people replied to the tweet – some supporting the family but others made racist and insulting comments towards them.

One person said the ad promoted “race/ancestor betrayal” and criticised social welfare spending on immigrants, while another compared the “IQ of central Africans [with] the IQ of mentally disabled”.

Ms Ryan said she was shocked that being in the advert in had prompted such a negative reaction.

Ms Ryan said: “I got so upset and angry at the same time. These people are looking at my child and saying all this hurtful stuff. He’s a completely innocent child.”

While the racist abuse was a shock to Ms Ryan, her partner said he had experienced it all his life it had become “sort of normal”.

“It is probably once every year or two, someone will say something hateful towards me because of my skin colour which is obviously something I cannot do anything about but these people do not care. There are not interested in logic or reasoning. They are just filled with hate,” Mr Mathis said.

On Sunday September 8th, Ms Ryan was alerted to the tweet and accompanying comments by the ad agency.

When she reported the matter to the Garda she was told it was a civil matter.

Shane O’Curry, director of the European Network Against Racism Ireland (ENAR-I), told them they could report hate speech under the Prohibition of Incitement to Hatred Act 1989.

In order to do this, Ms Ryan said she had to read the abusive tweets and screenshot them to collect evidence.

“No one should be subjected to that stuff,” she told Tubridy.

There have been fewer than 10 convictions under the law, however, and it has been “under review” since 2000.

Ms Ryan subsequently reported the matter to the Garda but it had not yet been assigned an investigating officer.

She said the couple had decided to speak out to about their experience to bring about change.

“I can’t feel like this and do nothing,” she said.

Mr Mathis, originally from Brazil, grew up in Liverpool and the Cotswolds. They returned to Ms Ryan’s family home in October 2018 to save money, and took part in the Lidl campaign to boost their savings.

Previously the couple has said they bore no malice towards Ms O’Doherty. “We actually thank her for highlighting there is no real hate-crime legislation. We feel it’s our duty now to do something about this.”