Cost to clean up former dump at Bray could be €12m 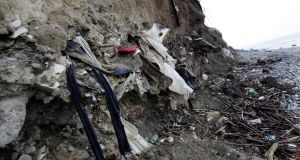 A former dump near Bray in Co Wicklow which is spilling asbestos waste on to a beach could cost €12 million to clean up, according to the latest consultants’ report on the site.

The report, the third in a series commissioned from environmental consultants Fehily Timoney, identifies the site as “having a high risk from coastal erosion and cliff instability, with landfill material also at risk of being eroded and transported down-shore”.

The report says “potential moderate risk exists to users” of the nearby beach “due to asbestos-containing material” being exposed during coastal erosion.

It says a “do nothing” scenario for the former landfill is not an option.

The former dump which was used by the then local authority Bray Urban Council contains more than 104,000 cubic metres of mainly inert domestic and construction waste, as well as possible industrial waste. It is up to 8.7m deep in parts.

While the dump served the town of Bray, it is located on the border of counties Wicklow and Dublin, with most of the waste lying in the Co Dublin section, bringing it within the administrative area of Dún Laoghaire-Rathdown County Council.

According to the Fehily Timoney report which was commissioned by Dún Laoghaire-Rathdown County Council, the dump was closed in 1968, and was sold to Woodbrook Golf Club in 1992.

It also notes options to clean up the site have been costed at between €10,000 and €12 million ranging from protecting the “toe” of the dump from the sea with rock armour, to removing the entire contents for specialist treatment.

In the short-term, the report says Wicklow County Council, which is now responsible for the Bray area, Dún Laoghaire-Rathdown County Council and Woodbrook Golf Club should implement a series of “weekly or bi-weekly” inspections, with the frequency of inspections increasing after a storm.

Bray-based Wicklow TD John Brady welcomed the identification of options “to put an end to hazardous waste being washed into the Irish Sea at the north beach beside Bray harbour”.

“This report has been sent to the EPA for consideration, and, hopefully, action can be taken as quickly as possible once funding is in place for the necessary works to take place.”