Diarmaid Ferriter: a history of partition and Europe’s role 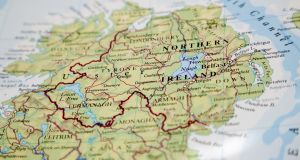 In February 1920, the British cabinet, chaired by prime minister David Lloyd George, agreed to give Ulster unionists what they sought: a Northern Ireland of six counties, through the Government of Ireland Bill enacted later that year.

Philip Kerr, Lloyd George’s closest adviser, explained to CP Scott, journalist and Liberal Party politician, that the bill would accomplish “two essential things: it would take Ulster out of the Irish question and it would take Ireland out of English Party controversies”.

That did not mean that British politicians of that era thought of Irish partition as a permanent or ideal solution– many regarded it as a retrograde step – but it had the advantage, as they saw it, of getting the Ulster question out of the way so that the focus could shift to dealing with Irish republicans and ending the war of independence.

Partition also moved Ulster nationalists “out of the Irish question” and feelings of betrayal and abandonment were acute, with much justification. In October 1922, a nationalist deputation from Northern Ireland arrived in Dublin to meet members of the provisional government of the new state. They got short shrift from Kevin O’Higgins, the minister for home affairs, who essentially told them they were on their own and that what northern nationalism needed was “a great deal of strenuous voluntary work – just the same sort of strenuous work that brought the national position to the stage it has reached”. The washing of southern hands could hardly have been more apparent.

The desperate pleas to southern Ireland by northern nationalists were to be repeated at later stages, but making common cause with them was largely rhetorical for the southern political establishment. The oft repeated contention was that partition was a British imposition and could only be undone by Britain; that there was no requirement for the Free State, or later the Republic, to come up with a solution. It was referred to as a festering sore but it also remained quite abstract for most.

Twenty years later, British war-time prime minister Winston Churchill was prepared to offer a British declaration accepting the principle of a united Ireland without unionist consent; a reminder of the lack of consistency on the part of the British political establishment when it came to the status of Northern Ireland. But after the Irish republic was declared in 1949, the British government passed the Ireland Act, which insisted, “In no event will Northern Ireland or any part thereof cease to be part . . . of the United Kingdom without the consent of the parliament of Northern Ireland”. The act has been described by historian Brian Barton as leaving northern unionists “in a position more impregnable than ever before in the twentieth century”. But in truth, Northern Ireland was rarely a priority for British governments; there was neither much interest in it nor knowledge about it.

In tandem, it was asserted by successive taoisigh that forcing an end to partition was unacceptable but when it suited, the anti-partition drum was banged, as witnessed with Éamon de Valera’s indulgent international anti-partition tour in 1948 that achieved nothing. De Valera’s successor Seán Lemass was determined to initiate a North-South thaw but he expressed profound irritation with northern nationalists whom he regarded as intractable as their unionist counterparts.

Occasionally there were challenges to the failure to confront partition meaningfully or honestly. Ernest Blythe, minister for finance in the 1920s, insisted in the 1950s that strident anti-partition rhetoric had been completely counterproductive, while barrister and future judge Donal Barrington asserted that contrary to nationalist narratives, “Partition was forced on the British government by the conflicting demands of the two parties of Irishmen.”

Taoiseach Seán Lemass was adamant in 1962 that, with British and Irish membership of a common market, “partition will become so obviously an anachronism that all sensible people will want to bring it to an end”. By the end of that decade, however, the Troubles had erupted; neither the British or Irish governments were prepared for this but there was an increasing recognition that loose or emotive rhetoric about Irish unity was dangerous. Nevertheless, with British and Irish membership of the EEC looming, Seán Kennan, the Irish ambassador to Europe, was optimistic in 1970 that “membership would obviously contribute significantly towards the ending of partition”.

In 1973, however, Garret FitzGerald maintained that articles two and three of the Irish constitution, containing the territorial claim over the north, were of “no practical value”. Later that decade, British prime minister Harold Wilson warned, “no solution could be imposed from across the water. From now on we had to throw the task clearly to the Northern Ireland people themselves.”

It is not the case, however, that there was a burning southern passion for Irish unity. In 1972 John Peck, the British ambassador in Dublin, reported that he had asked taoiseach Jack Lynch how important the issue of reunification was to the republic’s electorate, and “his answer amounted to saying that they could not care less. As far as he was concerned, he wanted peace and justice in the north and close friendship and co-operation with us.”

Over subsequent, bloody, decades, a version of that solution was eventually arrived at. But the fears raised by TK Whitaker in corresponding with Lynch at the outset of the Troubles remained relevant: “We can’t take over Britain’s financial contributions, nor do we want the terrifying task of keeping sectarianism and anarchical mobs in order.”

In relation to attitudes in the North to reunification, there has been no shortage of questions asked in the last four decades. In 1990, political scientist John Whyte identified 25 polls between 1973 and 1989 about the North’s constitutional status, and there were broad consistencies. A united Ireland had minuscule support from Protestants, far from complete support from Catholics, and the solution that attracted most support from both communities was power sharing.

With the 1998 Belfast Agreement came a guarantee of the North’s union with Britain, but it was recognised “it is for the people of Ireland alone” to decide on the issue of unification and the agreement includes a provision for the holding of a border poll. It also led to the principle of consent being enshrined in the constitution of the Republic. These developments amounted to recognition of the need for accommodation of change and self-determination, and involved setting aside the Government of Ireland Act of 1920.

In the years since, North-South co-operation has been, in the words of Andy Pollak, former director of the Centre for Cross Border Studies, “a quiet cross-border success story”, prompting the assertion of Northern Ireland first minister Peter Robinson in 2009: “I don’t think the relationship between Northern Ireland and the Irish republic has ever been better than it is at the present time.” In parallel, numerous Northern Ireland Life and Times (NILT) surveys indicated that expectations of a united Ireland were falling and there was an increase in the number of Catholics who favoured staying in the UK.

In 2011, Sinn Féin assembly member Barry McElduff rubbished a NILT survey that found only 16 per cent of the overall population of the North were in favour of a united Ireland, as “with Sinn Féin’s clear position of uniting this country, the party received over 26 per cent of the vote in the latest election”. But it was naïve to think that all those who voted for Sinn Féin, whether North or South, craved a united Ireland. As Sinn Féin Donegal TD Pearse Doherty admitted in 2015, in relation to his constituents, “it is not their burning question. What we have to do is convince people it is in their best interest.”

Achieving that seemed a remote possibility, as was underlined by a North- South poll unveiled by RTÉ and BBC in November 2015 which found that only 13 per cent in the North and 36 per cent in the republic wanted to see a united Ireland in the short to medium term. While the figure in the republic for those who would like to see it in their lifetime was much higher, at 66 per cent, that dropped to 31 per cent if it would mean paying more tax.

Brexit however, has brought the issue of partition back into the frame, along with many public acknowledgements that the “soft border”, over which 30,000 travel each day, is convenient and valuable for North and South, even more so now as both economies are exposed to the consequences of Brexit. How this border question plays out will depend, not just on Anglo-Irish or North/South attitudes, but also on EU sentiment as a whole. But given the economic realities, tension and disunity in the UK, the desire of most in NI to remain in the EU, the increasing strength of Sinn Féin and the endurance of doubts (which have always existed) about Britain’s commitment to, or interest in, Northern Ireland – as well as an Irish Government more vocal about Brexit as something that demands a revisiting of the issue of Irish unity – it may be the case that the historic predictions about the impact of the European question on Irish partition could come true.

What will remain problematic in any move towards unity, however, is dealing with the reality of an Ulster unionism that may be much weakened, but cannot be ignored or coerced.

Diarmaid Ferriter is Professor of Modern Irish History at UCD