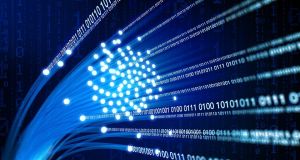 GDPR sets strict limits on the processing of personal data, making it difficult, for example, to use smartphone location data to fight Covid-19. Photograph: iStock

The majority of Irish people would be willing to share personal data and medical records to help fight a pandemic, a new survey has found.

The research, which was commissioned by the Irish Computer Society, found an average of 87 per cent of people would share their data in a public health emergency such as the current coronavirus outbreak, a figure that rises to 93 per cent in the younger 18-24 age group and among over-55s.

Some 84 per cent said they believed technology would help overcome the current outbreak, with the 18-24 age group more confident of this at 92 per cent. Men were also more assured of technology’s role in fighting coronavirus.

However, 78 per cent do not trust social media to spread awareness about how to prevent the transmission of coronavirus, with the older age group influencing that figure.

The research was released to coincide with Tech Week 2020, which aims to encourage students to engage with technology in creative ways. The society surveyed 1,000 people.

An average of 60 per cent of those surveyed said they would consider to an implantable device or chip if it made medical conditions easier to manage and enhanced day-to-day life.

“Researchers, businesses and innovators around the world are putting technology to work to alleviate the effects of the global health crisis. From applications that collect data to track the spread of the virus to 3D printed ventilators for hospitals, it is no wonder that 84 per cent think technology can help to beat the Coronavirus outbreak,” said Jim Friars, chief executive of the Irish Computer Society.

“Efforts to contain the spread of Coronavirus have also reached new levels. As the pandemic spreads further, it has become clear that personal data will play an essential role in understanding the virus and ultimately containing it. Our survey indicates that the vast majority of people are happy for medical researchers, practitioners, and public health officials to collect and analyse their personal data in a bid to better track the virus, learn more about how it spreads, and predict its movements.”

“One of the most common tools being employed around the world has been the gathering of location data using smartphones and data from mobile networks. Our phones track our steps and many people have wearable devices that can collect statistics on our vitals and lifestyle. Potentially, this data could now be used to track and accelerate a cure for Covid-19.”

However, Mr Friars said the use of data in this way also raises questions about data ownership, access and privacy.

“Concerns have already been raised by privacy activists about the use of temporary ‘symptom tracker’ applications used in the fight against the outbreak. Any personal data collected should be protected to the maximum extent of the law, anonymised as much as possible and disclosed only to health authorities, and not under any circumstances shared with other authorities without explicit consent.”

Meanwhile, European scientists and technologists are working on a joint initiative to support the use of digital applications in the fight against coronavirus while complying with tough privacy laws.

The Pan-European Privacy Preserving Proximity Tracing (PEPP-PT) brings together 130 researchers from eight countries to develop applications that can support contact tracing efforts within countries and across borders.

These will become more important in containing future flare-ups in Covid-19once country-wide lockdowns have succeeded in ‘flattening’ the curve of the pandemic’s spread.

“Our goal is to provide a backbone for the digital core components of the global fight against Covid-19,” said Hans-Christian Boos, founder of business automation company Arago and a member of a digital advisory council to the German government.

“The PEPP-PT platform others can build on includes an anonymous and privacy-preserving digital proximity tracing approach, which is in full compliance with GDPR and can also be used when travelling between countries.”

GDPR sets strict limits on the processing of personal data, making it difficult, for example, to use smartphone location data to fight Covid-19.

A more promising route is to track connections made between people’s smartphones using Bluetooth, a communications technology where ‘handshakes’ between devices can be logged and used to alert those who have come into close proximity with someone who tests positive.

That is the approach behind the TraceTogether app launched by Singapore to support its so-far successful public health response to coronavirus that has kept Covid-19 infections in the hundreds.

More than 851,000 people worldwide have contracted Covid-19 with 42,053 dying from it, according to a Reuters tally on Wednesday. Italy has been hardest hit, with 12,428 fatalities.

The Republic is working on its own app which could go live in the coming week, according to the HSE. Health authorities confirmed earlier this week that work was underway on a contact tracing app that would help the contact process take place more efficiently. It is likely to use bluetooth technology to detect when devices are in close contact with each other.

The UK, which has left the European Union, is poised to launch its own digital contact tracing initiative, according to reports. The UK contact tracking app, which will operate on an opt-in basis, would be released either just before or just after a lockdown is lifted, Sky News reported on Monday, citing several people with close knowledge of the project.

Even if Britain does go it alone, its researchers - including from the Oxford Big Data Institute - have made a major contribution towards assessing the potential value of digital contact tracing to keep a lid on coronavirus. – Additional reporting: Reuters