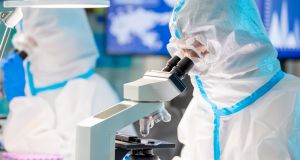 An adaditional 1,083 people were tested in the last 24 hour period. Seventeen tested positive for coronavirus, bringing the total number of confirmed cases to 4,696. Photograph: iStock

Three further coronavirus-related deaths were reported by the North’s Department of Health (DoH) on Friday, bringing the total number of fatalities recorded by the DoH to 521.

An additional 1,083 people were tested in the last 24 hour period. Seventeen tested positive for coronavirus, bringing the total number of confirmed cases to 4,696.

Earlier on Friday, new statistics showed people living in care homes have accounted for more than half of all coronavirus-related deaths in Northern Ireland.

The Northern Ireland Statistics and Research Agency (NISRA) recorded 380 such deaths among care home residents in the year until May 22nd, which represents 53.1 per cent of the total fatalities.

Of those deaths, 318 (83.7 per cent) took place in care homes. The remainder occurred in hospital but the deceased’s usual place of residence was recorded as a care home.

According to NISRA there have been a total of 716 deaths in Northern Ireland in which coronavirus was mentioned on the death certificate since the beginning of the outbreak.

This is 30 per cent higher than the total recorded in the figures released daily by the North’s Department of Health (DoH).

Northern Ireland releases two sets of data on coronavirus fatalities. The DoH figures include all deaths recorded by Health and Social Care (HSC) Trusts where there has been a positive test for coronavirus. These are mainly hospital deaths.

The NISRA figures are released weekly and are based on death registration. They cover deaths in all settings and include all fatalities which mention coronavirus on the death certificate, whether or not there was a positive test for Covid-19.

The 326 deaths in care homes and hospices involved 76 separate establishments.

According to NISRA the greatest number of coronavirus-related deaths were in Belfast, where Covid-19 was mentioned on the death certificate of 209 (29.6 per cent) of deaths. The lowest figure was in Fermanagh and Omagh, with 16 such deaths.