Students fear delay to Leaving Cert will cause stress and burnout 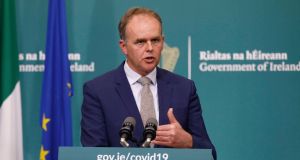 Minister for Education and Skills Joe McHugh said the announcement gave students clarity over the future of the exams and would allow students to catch up on work. Photograph: Leon Farrell/Photocall Ireland

Many secondary students have expressed concern that the Government’s decision to postpone the Leaving Cert until late summer will lead to burnout and mental health problems among exam candidates.

Minister for Education Joe McHugh confirmed on Friday that the exams will be postponed until late July or early August in light of public health concerns.

However, many students took to social media to complain that there was still uncertainty over when exactly the exams will begin and when college is likely to begin for those who hope to progress to third level.

Mr McHugh, however, said the announcement gave students clarity over the future of the exams and would allow students to catch up on work.

“Today’s announcement addresses that. It also provides them with several weeks of advance notice to prepare for the examinations. I hope it helps to alleviate some stress being experienced by students and their families at this time,” he said.

“Asking Leaving Certificate students and their families to refocus their attention from June to August is not something we do lightly. I know it will not be easy.

“However, I believe it is the fairest way of assessing students and giving them certification of achievement in school and a pathway to higher and further education and training, apprenticeship or work.”

The State Examinations Commission said it is planning to issue a revised exam timetable in early June for the 60,0000 candidates due to sit the exams.

The Junior Cycle, meanwhile, is set to be replaced by school-based exams which will run in the new academic year.

The changes mean tens of thousands of students who are due to progress to third level and further education are likely to commence their courses much later than they originally anticipated.

Deadlines for students to complete practicals and project work in a number of subjects such as history, geography and home economics will also be extended until late July. Students had been given a deadline of Friday May 15th to complete this work.

Leaving Cert students will likely be allowed to return to school for at least two weeks in July prior to the exams, subject to public health advice.

The delay to the exams will pose major logistical issues such as organising exams to ensure they comply with public health measures, as well as sourcing enough teachers to mark them.

The country’s largest secondary teachers union says it has a number of “serious concerns” over elements of the decision to postpone the Leaving Cert until late summer.

While the Association of Secondary Teachers Ireland (ASTI) said it welcomed the decision in principle, it understood there is concern over the length of the school year and the prospect of teachers being asked to return for two weeks or more in July to prepare students for the exams.

ASTI president Deirdre Mac Donald said teachers are “wholly committed to supporting their students at this time”, but the union said in a statement that it “has a number of serious concerns about elements of the announcement and will be seeking clarifications in relation to these”.

The Teachers’ Union of Ireland said it was also fully committed to supporting their students.

In relation to Mr McHugh’s request that teachers and schools facilitate the teaching of students in July, it said it will ask members to "engage in this process as a whole-school response to meet the needs of our students".

In a joint statement on the announcement, secondary school management bodies – the Association of Community and Comprehensive Schools, Education and Training Boards Ireland, Joint Managerial Body and National Association of Principals and Deputy Principals – said they appreciated the clarity.

In light of the revised schedule, the organisations said, students should “take a complete break from their studies in this Easter period so that they can return refreshed and renewed to the learning process”.

Last week a survey of almost 30,000 Leaving Cert students by the Irish Second Level Students’ Union found that almost half wanted to cancel the exams and use already-completed coursework to decide their grades.

The least-popular option was rescheduling exams to July or August, which was supported by one in five respondents.