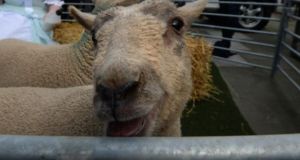 The long, slow spring has given way to frantic activity as Kenmare Mart manager Dan McCarthy and his team prepare to open their gates on Monday for their first sale in almost three months.

“We’re an independent co-op mart here since 1996 and we’d serve a good share of south Kerry, down as far as Caherdaniel as well as a lot of west Cork – all the Beara Peninsula as well as down to Bantry and over to Ballyvourney.

“We sell sheep and cattle. The sheep would be on a Monday and the cattle on a Thursday, once every two weeks from January through to July but from July on, we’d have sheep and cattle marts once a week until Christmas,” he said.

Mr McCarthy works with a team of 16 staff, mainly part-time, and joining him in preparing for the first sale was Patrick Doyle, one of the joint treasurers of Kenmare Mart, who recalled their last sale just after St Patrick’s Day.

“Our last sale was cattle on March 19th. We still provided a service where we bought cattle. We looked at the cattle and gave so much a kilo for them and they were brought in, weighed and valued and sold on to dealers,”Mr Doyle said.

According to Mr McCarthy, prices held up reasonably well. “They wouldn’t have been supreme but people were able to sell away and the export trade has picked up a bit. A lot of the weanlings [newly weaned animals] we sold last week were for export.”

Conscious that marts were scheduled to reopen under phase two of the Government’s roadmap, Mr McCarthy and Mr Doyle have spent the past few days putting the finishing touches to their plans.

Mr McCarthy explained that June is a quiet time of the year for cattle sales, particularly in Kenmare as it serves mainly weanling country in west Cork and south Kerry, and weanling sales do not really peak until July, August and September.

“We’ve probably been preparing for reopening since before we closed. We had a good share of it done with screens up between the auctioneer and the seller and in the canteen and between our office staff and the customers.

“We’ve our homework done as best we can. We’ve the floor marked out for 2m distancing and we’ve a one-way system in place where fellows go around one way to look at the stock but they must still stay two metres apart.”

Mr McCarthy and his team have introduced a colour-coded system in the sales ring, which can accommodate 150-200 farmers – with green showing where farmers can sit and red showing where they cannot – but with social distancing restrictions in place, capacity will now fall to 36.

“I think it should work well. Everybody is well used to keeping 2m apart now going to the shop. They’re conscious of it, they’ve seen no church for the last two months and no football matches, so they’re well used to it.”

Farmers will be given a time that their animals will be sold and they can wait in their vehicle until their lot number is called. Mr McCarthy expects some local farmers to return home to do some work on their farms after dropping off their animals.

Mr McCarthy’s advice to farmers planning to attend Monday’s sale is, firstly, not to come if they are feeling in anyway unwell. If they do come, they should adhere to what mart management advises them as they move around mart.

“They must listen to us because we don’t want a situation where we have to close down again in three weeks after finding out somebody who was at the mart picked up the virus. That’s the one thing we don’t need.”