Varadkar says ‘up to 50%-60%’ of population could get coronavirus 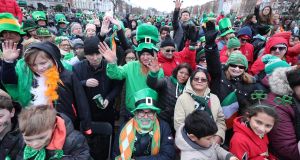 The subcommittee also decided that all St Patrick’s Day parades across the country. Photograph: Niall Carson/PA

A €3 billion package to deal with coronavirus will pump more money into the health service, help at-risk businesses and change the rules around sick pay to encourage people who will need to self-isolate and stay away from their workplaces.

Taoiseach Leo Varadkar announced the package following a meeting of the Cabinet subcommittee established to deal with coronavirus but warned that, in a worst-case scenario, it may not be enough.

The subcommittee also decided that all St Patrick’s Day parades across the country should be cancelled on foot of a recommendation of the National Public Health Emergency Team.

An additional €435 million will be allocated to the HSE. Minister for Health Simon Harris said this would be used to increase the public health capacity to trace contacts of people with the virus, as well as providing for more beds, more overtime, more staff and more homecare packages to help take pressure off hospitals.

Mr Harris said he was conscious many people were worried but there was no need to panic. He said the Government and the State “can take action and will”, but asked citizens to “step up” too and take very seriously the guidance given on hand hygiene and cough guidance to help minimise the spread of the virus.

The extra money for the health service will also be used to develop home testing as well as “remote management of mild to moderately ill patients at home and the provision of dedicated Covid-19 services outside hospitals”, according to a Government statement.

per cent or 60 per cent” of the population could get the virus.

“There will be a significant proportion who will require critical care. And a percentage that we don’t know, we honestly don’t know yet – it could be less than 1 per cent, it could be as much as 3 per cent, or 3.4 per cent – mortality. But when you’re talking about 1, 2 or 3 per cent of half the population, those are very big figures.

“This could go on well into next year,” Mr Varadkar added. He said resources were not infinite and said there was a possibility funding could become difficult as the year progressed.

Ministers will also meet banks and other “economic actors” to ensure there is a “joined-up effort” to deal with the economic effect of the virus.

Mr Varadkar will take part in a European Council meeting via video link tomorrow and said it is important that all EU leaders “act as one, we don’t have a situation where member states do their own thing”.

He also said Opposition leaders would be briefed after each meeting of the Cabinet subcommittee on the coronavirus.

Some €2.4 billon is being made available for income support measures, which will see a higher level of sick pay, increasing from €203 per week to €305 per week for a maximum of two weeks, introduced for those who are certified as having Covid-19.

The new higher payment will come into effect from the first day of an illness, rather than the existing scenario, which sees it begin from the sixth day of illness.

The Taoiseach said emergency legislation to change the existing rules governing sick pay would be introduced in the Dáil. The Seanad will also have to be recalled to pass the legislation.

Companies affected will be assisted with a €200 million liquidity support fund, using funds the Government had set aside to deal with the effects of a no-deal Brexit this year. Another €200 million will be provided for rescue and restructuring scheme for vulnerable but viable business.