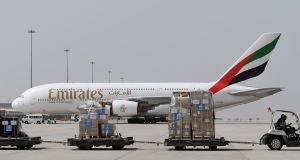 Emirates has announced it will suspend most passenger flights by March 25th. Photograph: Karim Sahib/AFP via Getty

Emirates, which flies twice a day between Dublin and Dubai, has announced it is to suspend most of its passenger flights by March 25th as result of the coronavirus crisis.

It becomes the latest airline to dramatically scale back its operations as countries across the world impose travel restrictions and bookings collapse.

“Emirates would like to clarify that while it will suspend the majority of its flights by March 25th, the airline will continue to operate passenger and cargo flights to countries as long as borders remain open, and there is demand,” the company said in a statement.

The statement said that as “a global network airline, we find ourselves in a situation where we cannot viably operate passenger services until countries re-open their borders, and travel confidence returns,” quoting Emirates Group chairman and CEO Sheikh Ahmed bin Saeed al-Maktoum.

“By Wednesday March 25th, although we will still operate cargo flights which remain busy, Emirates will have temporarily suspended all its passenger operations. We continue to watch the situation closely, and as soon as things allow, we will reinstate our services,” the statement continued.

The airline said it would not be cutting jobs, but would instead implement a temporary reduction in basic salary for most employees ranging from 25 per cent to 50 per cent.

Ryanair, Aer Lingus, British Airways and other airlines including United Airlines, Air France-KLM, EasyJet, and Finnair have all unveiled drastic measures to cut costs after several countries, including Germany and Spain, closed their borders.

Last week the Centre for Aviation warned that by the end of May most airlines would be bankrupt due to the unprecedented travel restrictions that are being rolled out by governments around the world.