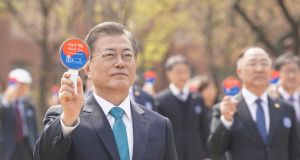 Bono has continued his efforts to secure more Personal Protective Equipment (PPE) for Irish health workers by writing to the South Korean president Moon Jae-in asking for help sourcing the material and offering to pay for it himself.

A tweet on Sunday morning from the official account of the Blue House, where the executive branch of the South Korean government is housed, confirmed that contact had been made by the U2 frontman.

“Humanitarian activist Bono, the lead vocalist of the rock band U2 and nominated for the Nobel Peace Prize, recently sent a letter to President Moon Jae-in,” the tweet said. “It was about Ireland asking for help to overcome the Covid-19 crisis.”

Mr Moon is understood to have said to have agreed to pursue the request for help with health authorities and suppliers in his country.

The letter written by Bono hailed South Korean’s efforts at slowing the spread of the virus. The country was one of the first to be impacted by Covid-19 but has managed to lessen its impact through a rigorous testing regime and strong medical response.

Bono and U2 have set aside €10 million of the band’s personal wealth to pay for PPE for frontline medics working to combat coronavirus.

The singer has also made contact with some of the world’s most powerful businesspeople to see how they could help source medical supplies out of China and other parts of the world.

Mr Moon joins a list of contacts made including Chinese magnate Jack Ma of Alibaba, Tim Cook of Apple, Mark Benioff of US software giant Salesforce and Doug McMillon, chief executive of US retail giant Walmart.

Last year U2 performed in South Korea for the first time and while in Seoul, Bono met with Mr Moon to discuss the country’s contribution to fighting disease in the developing world.