Ellis’s Yard in Ballyvolane a site of fly-tipping for almost 20 years, says campaigner 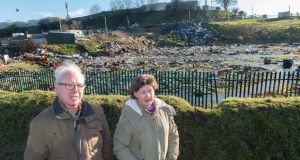 Residents in one Cork city community are sceptical about a council plan to clean up and stop an illegal dump which they say has been operating for almost two decades. Noreen Murphy was one of several residents from the Glen and Ballyvolane who protested outside the Cork City Council meeting this week, calling for action to clean up the dump at Ellis’s Yard. The site is just off the Northern Ring Road in Ballyvolane.

“There are around 3,200 houses from Dublin Hill over to Ballyvolane. Some of them within just 300m of this dump. Last summer the smell and flies from the dump were unbelievable, particularly when there was any kind of a wind,” she said.

Ms Murphy said people are continuing to dump all sorts of domestic rubbish there while builders are also dumping construction waste. However she is particularly concerned about the possibility of asbestos roofing and gases from electrical items such as fridges being released into the air.

“We have everything being dumped in there – tyres, bits of fridges, plastic doors, sofas, wardrobes.

“Last year we had 90 fires there, almost two a week, and who knows what sort of toxic fumes are being released with that level of burning,” she said.

Ms Murphy pointed out that the site is adjacent to the Spring Lane Travellers Halting Site and Cork City Council has a responsibility to the residents there as well as to residents of the nearby Glen Fields housing estate as they are all city council tenants.

The illegal dump site is down in a valley and is almost the size of an adjacent GAA pitch belonging to Glen Rovers. It has continued despite three huge clean-ups in the past costing some €570,000 between 2003 and 2014.

Local Workers Party councillor Ted Tynan said responsibility for the site lay with Cork City Council. He said the decision to privatise waste collection had led to an increase in fly-tipping. Private refuse collectors do not offer the waiver system that had been available from the council, he said.

He said the council was responsible for the clean-up and should do it immediately.

“I know they are trying to source contractors to do the job. They can’t do it themselves because they no longer have the cleaning staff, but they need to move on this as a matter of urgency.”

“This illegal dump is on Cork City Council land. Regardless of how the rubbish got there, it’s the responsibility of the city council to clear it up. Allowing it to build up while they try to come to agreement on a permanent use for the site is no good to residents,” said Mr Moran.

In a statement issued after the protest, Cork City Council said it understood the frustrations of residents with regard to illegal dumping at Ellis’s Yard but pledged to begin a major clean-up within the next few weeks.

“Works will also include the repair of the surrounding palisade fencing and the installation of CCTV to deter future dumping on the site. Cork City Council will also work closely with other State agencies in terms of progressing multiagency site inspections,” the council said .

But Ms Murphy, who lives on nearby Glen Heights Road, remained sceptical about the council’s commitment to a clean-up and to finding a solution that ensures dumping will stop at the site.

“They are making promises and plans for five years . The city council’s own policy on littering says the person responsible for an area where the public has access to is obliged to keep the place litter-free regardless how the litter got there, so Cork City Council needs to start implementing their own policy,” she says.