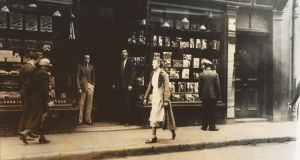 MP O’Sullivan’s tobacconist on Academy Street, Cork: the original family business of local man James O’Sullivan who has passed away at Marymount Hospice.

Warm and generous tributes have been paid by political and business leaders in Cork to local businessman James O’Sullivan who passed away at Marymount Hospice after a long battle with cancer.

Mr O’Sullivan, a director of wholesalers M&P O’Sullivan, was a well-known figure in Cork business circles, having served on three separate occasions as president of the Cork Business Association while he was also known for his charity work in Carrigaline where he lived.

Fianna Fáil leader Micheál Martin said it was with great sadness he had learned of the death of Mr O’Sullivan, who was in his late 50s, and he extended his sympathies to his widow, Cathy, and their children, Eoin and Emma, on their loss.

“James was a man who has been at the heart of Cork business, social and charity life for decades, and his work in the community and voluntary section has made a huge difference to the lives of thousands of people across Cork city and county,” said Mr Martin.

Lord Mayor of Cork Cllr Des Cahill also paid tribute to the late Mr O’Sullivan as he recalled his involvement with the Cork Business Association and his charity work with the Carrigaline & District Lions Club for whom he organised afundraising cycle to Kenmare every year.

“James was such a larger-than-life character. He will be hugely missed by everyone in Cork and Carrigaline . . . he was always full of life, battling to the very end. He fought his illness with great dignity but also with humour so he will be sadly missed,” Cllr Cahill told Cork’s 96FM.

Cork Business Association chief executive Lawrence Owens also extended his sympathies to the Mr O’Sullivan’s family as he recalled how proud he was of the family firm founded by his grandfather in 1905 and which continues to trade today as a constituent of the Gala group.

“James is a huge loss obviously to Cathy and his family but also to Cork and from our own perspective, to the CBA. He was president of the CBA on three occasions, he was a director, he was involved in the executive. He’s had a lifetime association with the CBA so he will be sorely missed.

“But he was also such a benefactor to so many organisations and he was always a very humble and modest man so it often went under the radar. But the money he would have raised for charities over the years would have been considerable – he was just a generous, decent man and great company.”

A native of Douglas in Cork city, the late Mr O’Sullivan spoke to the Carrigdhoun newspaper in December on the eve of receiving the Corkonian of the Year Award and he spoke candidly about his battle with cancer but also recalled proudly how his grandfather had entered business.

“My grandfather, Patrick O’Sullivan, started out as a grocer’s assistant, which is a fancy name for a messenger boy. He got fired from his job over a dispute with his boss and was out of work for five weeks, when he saw a shop to rent in Princes’ Street, Cork, which is now Rossini’s Restaurant.

“He rented it and within a few years bought the shop next door and the one next to that,” said Mr O’Sullivan as he recounted how his grandfather concentrated on tobacco products. In 1927, he set up the Red Abbey Tobacco Factory in Mary Street which was opened by William T Cosgrave.

The late Mr O’Sullivan joined the company in 1977 when it entered the cash and carry trade and today M&P O’Sullivan, which supplies to Gala shops as well as the White Hat catering brand, employs over 40 staff at its warehouse operation off Sarsfield Road in Wilton.