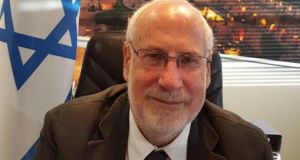 Ze’ev Boker: The Israeli ambassador to Ireland was scheduled to speak at Trinity College by the Society for International Affairs, but the event was cancelled due to protests.

Trinity College Dublin has condemned a protest that led to the cancellation of an event with the Israeli ambassador to Ireland as an “unacceptable attack on free speech”.

Ze’ev Boker was due to speak on Monday at a talk organised by the Society for International Affairs (SOFIA). The event was cancelled after a group of about 40 protesters from Students for Justice in Palestine demonstrated and chanted slogans outside the venue.

In a statement on Tuesday, the university said it “regrets” that Mr Boker was unable to take part in the question and answer session “after protesters from inside and outside the university threatened to disrupt the event”.

“The university regards what happened as an unacceptable attack on free speech,” the statement said.

The university said the event was cancelled before the arrival of Mr Boker due to security concerns. “University officials had unsuccessfully tried to get the protesters to leave an area surrounding the door to a lecture theatre.”

A spokesman for Students for Justice in Palestine said the protest was conducted in a peaceful manner. He said the group’s issue with the event was the absence of an opposing view being put forward.

In a statement, the Israeli embassy said the suggestion the event was unbalanced was “disingenuous”.

“The BDS protestors last night at Trinity are obviously not interested in any kind of dialogue to achieve peace or even to promote the rights and wellbeing of Palestinians,” it said.

“They obstructed the entrance to the venue for both the Ambassador and those students interested in hearing him.

“SOFIA is a society for students who are interested in pursuing a career in the diplomatic corp. Having an audience with the Israeli Ambassador is exactly the kind of event to prepare them for a future in diplomacy and conflict resolution.

“The SJP protest was an infringement, not just of freedom of speech and assembly, but of other students’ rights to pursue their interests and career goals. Their claims that the scheduled talk was unbalanced are disingenuous.

“Their own talks and meetings never include any alternate viewpoints and they are quick to shout down any speech from different Israeli viewpoints.”

TCD provost Patrick Prendergast said the incident was “most unfortunate and represents the antithesis of what Trinity stands for”.

“Universities should be able to facilitate the exchange of ideas. The protesters have violated that fundamental belief,” he said.

“Trinity will remain a home for debate,” he added, “and we will do everything possible to make sure that efforts to suppress the free exchange of ideas do not succeed. I look forward to welcoming ambassador Boker back to Trinity to speak again in the near future.”