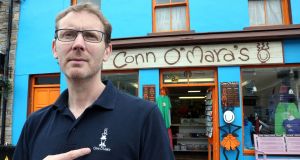 A Connemara businessman claims he is being subject to “corporate bullying” by a multinational over his attempts to secure a trademark for a cartoon character associated with his retail outlet.

Leo Mansfield, who owns The Outdoor Shop in Clifden, Co Galway, had applied to the Patents Office to register his “Conn O’Mara” logo as a trademark.

However, Cooley Distillery ,which is now owned by US-Japanese interests, has objected to the application as it says it would adversely affects its “Connemara” whiskey brand.

Mr Mansfield applied to the Patents Office in November 2015 to register the stick-life figure he and his wife, Susan, created and that the family business depicts on T-shirts and other clothing.

As he explained in subsequent correspondence, Conn O’Mara is a “friendly chap” born in 2001, who enjoys life even when “being chased by a cloud of midges”.

“He is happiest running through the mountains or beaches of Connemara, usually in the company of his trusted sheep, Seamus,” Mr Mansfield said.

Since 2011, his name has also been associated with a charity “loop-a-thon” around Connemara.

Mr Mansfield planned to diversify the trademark into other products, including water, soft drinks and alcohol, but was informed that Cooley Distillery had lodged an objection in February 2016.

In its objection, it argues that its own label has “established goodwill and recognition” and is used extensively in the State and internationally.

It says there is the likelihood of “confusion among consumers, if ‘Conn O’Mara’ is given a trademark, and it would be giving an “unfair advantage” to the detriment of the “distinctive character” of its whiskey.

Mr Mansfield has condemned as “deplorable” a request by Cooley to award costs against his family business if it goes to court, and describes it in his correspondence to the Patents Office as “corporate bullying”.

A spokeswoman for Beam Suntory said it was “confident of its position on this matter”.

The Patents Office said it did not comment on “particular ongoing opposition cases” and said there is no prescribed period in which it must adjudicate in cases of trademark oppositions.

However, geographical names “are not debarred per se from registration as trademarks” and each application must be examined on its own merits.