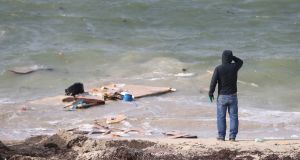 A man looks at debris at the scene in Claddaghduff, near Clifden in Co Galway where a woman died after her caravan was blown off a cliff in Storm Ali which has brought gusts of 91mph. Photograph: Niall Carson/PA

A north Connemara community has expressed shock at the death of a Swiss woman whose caravan was swept off the coast in violent storm force winds early on Wednesday.

The woman, who has been named as Elvira Ferraii from Switzerland, was staying on her own in the caravan at the Clifden Eco Beach Camping and Caravan Park near Claddaghduff, Co Galway, when the incident occurred at about 7.45am.

Storm Ali was at its peak, with violent storm force 11 gusts, when the caravan was swept from a ledge down an incline and may have somersaulted before landing on the tideline.

The Irish Coast Guard’s Cleggan unit, Galway county fire service members and gardaí were alerted shortly before 8am, and Ms Ferraii’s body was found close to the caravan.

She was pronounced dead at the scene and her body was taken to University Hospital Galway for a post-mortem examination.

The caravan was broken up by an incoming tide as continuing high winds caused much havoc throughout Co Galway and parts of Mayo early on Wednesday.

“It is so tragic that a visitor to the community should lose her life in this way,’’ he said. “I send my condolences to her family.”

“We had so much damage here throughout the area in the early hours of Wednesday morning, and it was definitely worse than Storm Ophelia last year,” he added.

Other people in the locality questioned why a status red warning had not been issued by Met Éireann.

The Clifden Eco Beach Camping and Caravan Park, where Ms Ferraii had recently arrived, stated on social media that it had closed until further notice.

Gardaí said a file on Ms Ferraii’s death would be prepared for the county coroner.

The unexpected ferocity of the storm on the Atlantic seaboard reached speeds of 143 k/ph at Mace Head, and caused major disruption throughout Co Galway on Wednesday.

There were long traffic tailbacks after trees fell on several routes, including the N59 from Clifden to Galway, the N17 and N84, and secondary routes throughout the county.

Thousands of homes and businesses were affected by power cuts, as ESB and local authority crews battled to cope with fallen power lines, trees and branches.

Bus Éireann suspended public transport for a time, and a 19th-century beech tree in Eyre Square was one of several hundred trees in both city and county that were uprooted by the southerly winds, veering west by midday.

“As President of Ireland, may I express my deepest condolences to her family. I would also take this opportunity to pay tribute to all those, in statutory and voluntary organisations around the country, who are helping and stand ready to assist their fellow citizens, and who are working to maintain essential services around the country.”