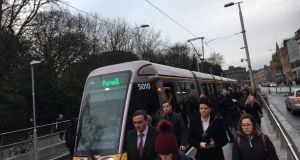 Luas commuters reported travel delays on the second working day of the Cross City line, with large numbers of commuters left waiting at stops and a lack of space on full trams on Tuesday morning.

There was no major traffic congestion in the city centre, as there had been on Monday when a traffic light malfunction on College Green at about 8.50am led to a severe logjam of buses and trams.

Several commuters using the Green line on Tuesday reported delays of at least half an hour travelling from the southside, due to problems finding space on carriages.

Michael O’Toole (24) a commuter travelling from Leopardstown into the city centre said there was a large backlog of people trying to get a Luas this morning from 8am.

Mr O’Toole said he arrived at the Glencairn Luas stop, in Leopardstown at 7.55am. “Usually when I get there there might be between 20 or 30 people waiting”, he said, adding that there were more than twice that number at the stop.

The first Luas that pulled up was packed to the doors and “impossible to get on” he said.

Mr O’Toole said he finally got on a Luas at 8.30am, and was half an hour late getting to work as a result. The Luas trams seemed “a lot less regular today”, he said.

Another commuter travelling from the Glencairn stop reported similar problems finding space on trams heading into the city centre.

Andrea Koenigstorfer said she was waiting at the stop from 8am and found an “awful lot more people than usual” waiting for the Luas.

Ms Koenigstorfer, who is from Austria, said commuters could not get on the first Luas that pulled up. She managed to squeeze on to the next tram but was nearly “standing on one foot the entire way” it was so full, she said.

She was half an hour late to work and said while it was “not the end of the world”, it was “annoying.”

Another commuter travelling on the Red line outlined similar problems, with people at Luas stops unable to get on full trams during the morning rush hour.

“I got to Heuston at 8.10am and I waited for the Luas. Three trams came and went and were too full for most people to get on,” he said.

The commuter said in the end he decided to get a bus into the city centre to work, but was half an hour late due to the delay.

All three commuters said they were disappointed the Luas did not seem to be running additional trams or carriages to deal with increased demand for the new Cross City lines.

One main traffic choke point along the new Luas line at Doyle’s corner near College Green proved, as expected, to lead to congestion.

The routine slow slog of buses and cars moving down D’Olier Street during the morning rush hour, combined with the new Luas track, and buses and taxis moving down Pearse Street along Trinity College created a traffic build-up that may become a regular fixture.

A spokeswoman for the Luas operator Transdev said some delays were due to an incident involving a delivery truck transporting concrete on Molesworth Street in the city centre.

The incident caused traffic to back-up for about 15 minutes, and “this would result in increased numbers of people waiting at platforms and congestion,” the spokeswoman said.

In November, the Government approved expenditure to purchase extended Luas carriages to service the Green line to cater for increased demand and ease congestion, but these new longer tram carriages have yet to be introduced.