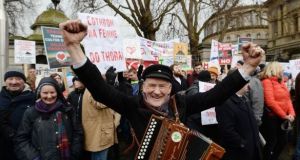 The King of Tory Patsy Don Rodgers outside the Dáil last month with fellow Tory Island residents calling for an a new ferry to service the island off Donegal. Photograph: Alan Betson

The commitment has been made as part of a series of proposals put to Tory islands in Donegal which helped to resolve their dispute over their new ferry contract.

The Tory islanders voted at the weekend in favour of a report by mediator Pól Ó Gallchóir which had been presented to islanders at a meeting on Friday night (mar 23).

The outcome, which has been welcomed by Minister of State for the Islands Joe McHugh, involves accepting provision of a 12-passenger fast ferry service in tandem with the conventional ferry which was awarded the new contract for the 15 km sea crossing between Tory island and Machaire Rabhartaigh.

Mr Ó Gallchóir, chairman of Foras an Gaeilge and former chief executive of TG4, recommended in his report that a fast ferry would initially be provided for with a short term contract organised by the island co-op, while the department initiated its formal public procurement.

The report also recommends increasing cargo runs from 26 weeks to 40 weeks per year, and extending the helicopter service provided by the Health Service Executive by at least two months over the winter.

The report refers to an upgrade of Machaire Rabhartaigh pier, which Donegal County Council is committed to, according to Mr McHugh’s department.

Significantly , the report recommends that the department review how it handles island transport, and also reviewing the role of Gaeltacht island co-ops. The department has previously been embroiled in rows over provision of both air and ferry services to the Aran islands.

A spokesman for Mr McHugh said that the department accepted these proposals, which were “cost neutral” in the main. The new contract for the conventional ferry serving Tory had resulted in some savings which would be used for the fast ferry, he said.

The overall review of contract procedures for island transport has been welcomed by Comdháil na n-Oileáin secretary Rhoda Twombly.

“The federation welcomes this review, as the consultation carried out does not tend to be taken into account at present, and we are also very glad that the situation with Tory has been resolved,”she said.

The dispute over the Tory sea link had arisen after Mr McHugh and his department discussed a new ferry for Tory last September as part of the EU grant-aided small ferries project.