‘Cocooning’ and mental health: Over 16,000 calls to Alone support line 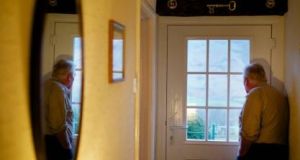 “We are encouraging any older person who is struggling with their mental wellbeing at this time to get in touch with us,” said Alone chief executive Seán Moynihan. File photograph: Getty

More than 16,000 phone calls have been made to a support line for older people launched in March as concerns mount over the mental health effects of “cocooning” during the Covid-19 lockdown.

Alone, which operates the service, said it is concerned about the mental wellbeing of many callers and appealed for a national strategy to combat loneliness.

As part of stricter social restrictions introduced to inhibit the spread of the virus, those aged over 70 have been requested not to leave their homes, a move that has led to many being cut off from normal contact.

The charity said that of those who contacted its service, over 70 per cent live on their own.

In the past 10 days, it said, 62 per cent of practical support requests were in relation to social isolation and loneliness.

As recently reported, Alone has also seen a “huge increase” in the number of those with suicidal ideation – calls have increased from just a few a week to as many as four per day.

“We are encouraging any older person who is struggling with their mental wellbeing at this time to get in touch with us,” said chief executive Seán Moynihan.

“For many, these difficulties are directly linked to the impact of Covid-19 and cocooning. Loneliness is a common issue, and long-term we need a strategy to combat loneliness across all age groups.”

Aside from its national helpline, run in collaboration with the Department of Health, HSE and local authorities, Alone staff have also made almost 47,000 phone calls to older people requiring support.

Alone has pointed to research published by the Irish Longitudinal Study on Ageing (Tilda) last year that showed loneliness has a negative impact on mental and physical health, and is most prevalent among over-75s.

However, there may be some hope in the coming weeks as speculation builds that the Government could change the rules around those “cocooning” so they can go outside for walks and possibly shop in supermarkets during restricted hours.

The Government’s request for people to remain in their homes during the pandemic, while generally supported by the public, has had other consequences. For instance, gardaí have reported a rise in domestic violence calls, up 30 per cent in some areas.