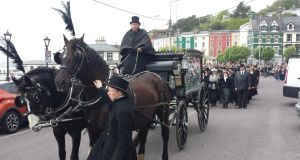 A horsedrawn hearse in Cobh at the commemoration of the sinking of the Lusitania. Photograph: Barry Roche

A strong wind was whipping up waves on a grey sea just off the Promenade in Cobh as the people of the town gathered yesterday to remember the victims of the RMS Lusitania.

It was exactly 100 years ago yesterday that Cobh, then Queenstown, came out to pay its last respects as 145 victims of the tragedy were buried in the town’s Old Church Cemetery.

The funeral cortege took almost three hours to pass as it made its way from the temporary morgues on the quayside to the graveyard over two kilometres away, eyewitnesses reported.

Yesterday, in the last of a series of events in Co Cork to commemorate the centenary of the sinking of the liner, the people of Cobh came out to re-enact the funeral with great solemnity.

People of Cobh watched in respectful silence as the cortege followed the original 1915 funeral route.

On to East Beach and Harbour Row, the funeral snaked its way, climbing this town of steep hills and steeples, past St Colman’s Cathedral, soaring to an ever darkening sky.

Up to the top of the town it went, and through the new housing estates that at the time were the fields where Cobh people watched from behind the ranks of military that lined the route in 1915.

A gentle drizzle quickly turned into a driving rain and bowler-hatted men and petticoated women braced themselves as they made their way down the hill to the Old Church Cemetery.

There, beside the neatly kept Lusitania graves, the crowd of several hundred huddled in the lee of cypresses and pines to shelter from the rain as they listened to MC Jim Quinlan.

“They saw the three open graves, three big pits that had been dug out by soldiers, the long high banks of earth beside the holes, the coffins with their white numbers on the lids.

“The coffins were unloaded from the hearses, lorries and carts and placed side by side in the mass graves,” said Mr Quinlan as he recalled how a lone bugler played The Last Post.

“[Then] a party of servicemen fired a volley of shots over the graves of the Lusitania dead and the people who had come to pay their last respects sang Abide with Me.”

For Cobh man Denis McCarthy it was a fitting conclusion to a week which had seen his home town remember the 1,198 men, women and children lost on RMS Lusitania.

“The weather was terrible but it didn’t stop the people of Cobh coming out in huge numbers to pay their respects on the very day a century later – it was so so appropriate.”