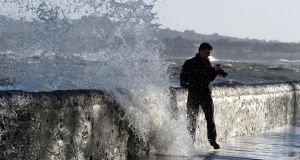 Statistically, most drownings occur during bathing or walking along coastlines, according to a review for IWS. Photograph: Cyril Byrne/The Irish Times/ File photo

When the moon is full and tides are high, the coastline can be a more hazardous location than being out to sea.

Parts of the Atlantic seaboard are particularly exposed to the swells and surges, rather than freak waves, which are associated with such strong tidal movements, Irish Water Safety (IWS) chief executive John Leech has pointed out.

While there is a public perception that “offshore” is synonymous with danger, the statistics show that most drownings occur during bathing or walking along coastlines or riverbanks.

A 25-year analysis for IWS from 1988 to 2012 found that of some 40 per cent of drowning cases with an identifiable cause, 10 per cent were associated with bathing, and another 10 per cent with walking.

Ability to swim is no safeguard in certain circumstances and the majority of drownings here still occur on inland waterways, the report found.

Mr Leech has warned that the full moon of July 2nd will cause high Spring tides, posing a higher risk of being washed into the sea or being dragged out by a rip current.

Walkers should remain alert and stay well away from the edge of ordinarily familiar coastal walks, he said, while those out on beaches or collecting shellfish at low water should be alert to a fast advancing tide.

IWS advises that people should carry a mobile phone, and should be in the company of others.

Anglers,especially eastern Europeans more accustomed to the benign Baltic, are also at risk and should always wear a life-jacket and maintain a safe distance from the water’s edge.

Three anglers have drowned so far this year, according to the IWS.

It says that sea swimmers should be mindful of rip currents, which are especially prevalent on surfing beaches.

“Never swim against this narrow current of water flowing away from a beach,” IWS says.

“Instead, swim parallel to the shore, out of the narrow current, then swim back to shore at an angle,” it advises.

Recreational divers completing drift dives need to carefully calculate the rate of drift, and ensure that the dive boat maintains contact with their divers throughout the dive, it says.

“Don’t delay if an emergency develops, call 112 and ask for the Coast Guard,” it says.

More information is available on iws.ie.