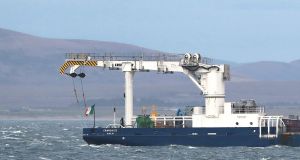 Irish Lights ship the ‘Granuaile’ has left Blacksod Bay to return to Galway, and it is expected that the Naval Service will also redeploy its patrol ship. Photograph: Brian Lawless/PA Wire

The Irish Coast Guard has scaled down its search for two helicopter airmen who have been missing since Rescue 116 crashed four weeks ago off the north Mayo coast.

The Irish Lights ship Granuaile has left Blacksod Bay to return to Galway, and it is expected that the Naval Service will also redeploy its patrol ship.

He said Garda divers would focus on shallower areas around the crash location of Blackrock island and Parrot rock 13km west of Blacksod when wind and tidal conditions are considered suitable.

He also confirmed that he had requested Coast Guard and Civil Defence volunteers to continue with “targeted searches of coastal areas” and monitoring of “specific areas of interest”, including the Duvillaun and Inishkea islands to the east and north of Blackrock island.

Irish Coast Guard senior pilot Dara Fitzpatrick (45) and co-pilot Mark Duffy (51) were the first two confirmed casualties of the crash, which occurred in the early hours of March 14th during an approach to refuel at Blacksod.

More than 8,500sq km of sea was scanned this past weekend by some 110 fishing vessels, along with RNLI lifeboats, Irish Coast Guard, Garda and Irish Underwater Council rigid inflatable boats, following an appeal by Mr Smith’s sister, Orla.

On Sunday, mountain rescue teams drawn from as far north as the Mourne Mountains in Co Down combed the shoreline at low tide, while the Garda Water Unit was at sea.

Supt Healy said on Sunday there would be “no scaling back” while debris from the aircraft was still being washed ashore, but a statement on Monday from the Air Accident Investigation Unit (AAIU), Garda and Irish Coast Guard confirmed that the Granuaile was leaving.

Supt Healy said that the remotely operated vehicle deployed from the Granuaile had now finished its work, and this data would be examined in detail.

“We will ask the ship to come back if needs be, but it may be that we will be able to examine certain areas with Garda divers and with Civil Defence drones,”he said.

Supt Healy said that if the AAIU investigators return to Blackrock island, this would also “be taken advantage of”, but much of the island had been photographed by aircraft.

The three State agencies reiterated their sympathy to the families of all four air crew, and expressed the hope that “with the extensive monitoring both at sea and on shore” the bodies of Mr Ormsby and Mr Smith would be found.

“The operation highlighted the value of inter-agency co-operation in meeting challenges of this type,”the statement said, and Irish Coast Guard appealed to mariners to keep a good lookout for any material associated with Rescue 116 and report any findings to Malin Head Coast Guard.

The AAIU preliminary report into the crash has to be published within a month.

It has so far confirmed that the helicopter’s tail section struck the western end of the island, and has ruled out mechanical anomalies before the crash.