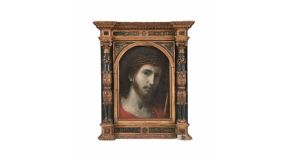 A small painting of Christ which was expected to make up to €800 at auction was sold for €120,000 at Adam’s salesrooms in Dublin on Sunday. Image: Adams.

A small painting which was expected to make up to €800 at auction was knocked down at €120,000 - or at least 150 times the estimate - at Adam’s salesrooms in Dublin on Sunday.

The painting, which measured just 34cms by 24cms was described as “from the Italian school”. It depicts the head of Christ with a crown of thorns, painted in oil on a copper panel, encased on an ornate painted frame.

James O’Halloran of Adams auctioneers said the vendor, an unnamed “institution”, was “absolutely delighted” with the price achieved for the picture of Christ.

The vendors were “not necessarily” a religious institution, said Mr O’Halloran.

Nor has the identity of the purchaser been revealed with the buyer having taken instructions over a mobile phone, apparently from his father, who is located outside Ireland.

To make a mystery hat trick for the picture, the artist is also unknown, at least to most people attending the sale.

Those who knew a bit more about the painting may have included three bidders who registered in advance for telephone bidding along with those in the sales room.

Mr O’Halloran said interest came from “the Continent, Britain and Ireland”. There was strong interest from Italy and a five minute bidding war featured the third-placed bidder dropping out at about €70,000, leaving the two remaining contenders to take the price up to an unexpected €120,000.

Such auction objects which are known as “sleepers” are “very rare”, Mr O’Halloran said. He remarked that this was probably “a good thing or people would say you were not doing your job properly”.

However, he did recall a small jade curiosity from a house sale in Clontarf some years ago which made “a few hundred thousand” much to the surprise of the vendors.

“You can’t know everything” he said. “You put it out there, but you rely on the market to find you a buyer”.

“We put it in the catalogue and we might get interest from specialists out there.” He said he did not think those who were behind the bidding war had actually seen the painting in advance of the bidding. Sometimes specialists will buy like that on the basis of a few high resolution photographs, he added.