Coast Guard crash: ‘It was poor visibility as there was constant rain’

A fleet of ambulances arrived pierside, but it became evident they would not be required 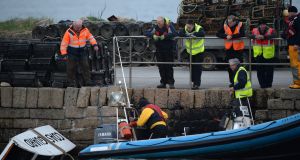 Debris from the helicopter being taken to the pier in Blacksod, Co Mayo, scene of the search for the missing Coast Guard crew. Photograph: Dara Mac Dónaill/The Irish Times

When Capt Dara Fitzpatrick and her crew were tasked on Monday night for a rescue mission, there was little to indicate that it would be anything more than a normal shift.

A fisherman working on board the international blue whiting fleet some 250km west of the Mayo coast had been injured and required medical evacuation to hospital.

The “top cover” which the Dublin-based Irish Coast Guard helicopter was asked to provide was for the sister aircraft in Sligo. This aircraft was flying out to the British-registered fishing vessel.

Southwesterly winds and moderate visibility were well within the capabilities of the S-92 Sikorskys, acquired over the past five years and flown by highly trained crew. Both aircraft planned to refuel at Blacksod lighthouse, before flying further west.

Photographer and cameraman Fergus Sweeney was at home in his parents’ house on north Mayo’s Blacksod peninsula when his cousin Simon called to tell him the helicopters were en route. Simon’s father, Vincent, is principal keeper at Blacksod lighthouse and Simon suggested that his dad might need a hand.

“It’s something we’ve done ever since we were kids,when Irish Coast Guard and Air Corps helicopters needed fuel,” says Fergus. “ Vincent knows most of them so well.”

His father, Ted Sweeney, was also a lighthouse keeper and was responsible for the weather forecast that delayed the D-day landings.

“Vincent reckoned it would be 11pm at least, so we went back home for a cup of tea,” recalls Sweeney.

“I remember it was very poor visibility as there was constant rain. Simon was looking at the satellite tracker and could see one helicopter was over Longford. He went back up to the lighthouse, I nodded off and next thing I was hearing him tell me that something had happened. And Rescue 116 had gone down.”

Back at the lighthouse, Irish Coast Guard volunteers had already arrived, along with an ambulance which had been called for the medical evacuation. The ambulance crew were already in shock. They had heard there had been an accident. The Sligo Sikorsky, which landed the injured fisherman safely, had spotted wreckage out to sea.

There had been no satellite alerts, no signals, no mayday. Last communication from Rescue 116, at 12.45am, was brief and to the point. It was, “landing in Blacksod”.

North Mayo fisherman Pat O’Donnell was among local skippers to get a “shout”. Three of his crab vessels, including those owned by his sons Jonathan and Patrick, put to sea from Ballyglass. In October, 1997, O’Donnell was instrumental in locating and rescuing a family of three who were trapped in a cave near Horse Island after the currach owned by German businessman Will Ernest von Below capsized. A Mayo diver, Michael Heffernan from the Granuaile diving club, lost his life in the rescue effort.

“Jonathan, my son, was rescued by the Sligo helicopter a few years ago, and at first we thought it was that crew that was in trouble,” said O’Donnell. “There was a bit of a rush to get out as we knew they would be wearing immersion suits and there was every chance the helicopter might have ditched and they might still be alive.”

The moon was out, mist was clearing, as the Mayo vessels put to sea. They heard on VHF radio communications between the Sligo helicopter and the RNLI Achill lifeboat. It had been directed to strobe light the water. A casualty, later confirmed as Capt Dara Fitzpatrick was located, taken aboard and flown to hospital. She was confirmed dead on arrival.

Back on Blacksod pier, a fleet of ambulances had arrived. As the hours passed, however, it became evident they would not be required. There was still no signal from personal locator beacons which each of the crew were wearing. Fergus Sweeney and his 16-year-old daughter Eva emptied his parents’ fridge to cook hot food for the rescue units.

The sun was out, sand glistening on beaches across the bay, wind a brisk southwesterly when Garry Bohan and John Shevlin arrived in to the pier on their rigid inflatable with some wreckage, including a large panel, from the helicopter.

They described a gathering swell and difficult conditions.

Debris was being carried north to the Inishkea islands. Even as they spoke, one of the helicopters landed to refuel and returned to sea again. An hour later, the Air Corps flew in Naval Service divers, while the Garda Water Unit arrived by road.

Shortly before 2.30pm, ashen-faced Irish Coast Guard operations manager Gerard O’Flynn confirmed on Blacksod pier that Capt Dara Fitzpatrick, one of its most experienced pilots, had been confirmed dead.

The search was continuing for her three colleagues. Extending his sympathies to her family and her flying colleagues, he described a sense of shock.

Just several days before, many Irish Coast Guard and RNLI lifeboat crew had been together under very sad circumstances – the funeral of one of the Irish Coast Guard’s most senior rescue crew, Daithí Ó’Cearbhalláin. “The rescue community is a small tight family . . . we all know each other so well,” said Mr O’Flynn.