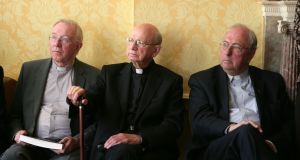 The late Bishop Eamonn Casey believed “he had done the church a great disservice”, Bishop of Clonfert John Kirby recalled on Tuesday.

“He used those words to me. He did realise the impact [on the church of revelations in 1992 that he had a son].”

Speaking to The Irish Times, Bishop Kirby could not say whether, feeling that way, Bishop Casey forgave himself. “I don’t know. He didn’t talk about it hugely.”

But Bishop Kirby didn’t feel it affected the late bishop’s self-esteem. He “had a reasonably good self-image despite what happened”.

Bishop Kirby visited his late colleague “three or four times a year” at Shanaglish near Gort, where Bishop Casey was from 2006.

“I liked him. He was a different sort, but I did like him. We weren’t close but we were friendly. His dynamism was one element that appealed to me.”

He recalled how the late bishop “was disappointed he wasn’t allowed celebrate Mass publicly, but he had a private chapel. There was a good deal of religion in him. He had this sense of awe before God, no worries or doubts.”

It was during a visit to Shanaglish that Bishop Kirby first noticed the signs of Alzheimer’s disease.

“He mixed up some material between his work with Trócaire and what he had been doing in Slough” (in west London – the English parish where Bishop Casey was before Shanaglish).

There was a recent visit to Bishop Casey at the nursing home in Newmarket-on-Fergus with former Trócaire director Justin Kilcullen and Julian Filochowski, former director of Cafod, the UK-based Catholic Fund for Overseas Development.

In March 1980, Filochowski was in San Salvador’s cathedral for the funeral of Archbishop Óscar Romero, who had been assassinated by government forces. More than 50 people died during gunfire and a stampede near the cathedral.

“The cathedral was packed with huge crowds outside. Soldiers felt the crowd was unruly and fired over their heads. It created panic.

“Most of the dead were crushed. Eamonn Casey went around among the injured and dead helping and supporting in any way he could.

“That was primarily why Filochowski wanted to see him. He wanted to meet him,” said Bishop Kirby.

They went for a meal to Bunratty Castle. “We talked about the funeral but he [Bishop Casey] probably didn’t remember it five minutes later.”

Bishop Kirby’s dealings with the late bishop began in 1990. Galway farmers wanted something done to help the west.

They approached him, then Bishop of Clonfert for two years. But “I didn’t think I had a great voice [influence]”.

He went to Bishop Casey in Galway who “took some persuading” but then got to work. 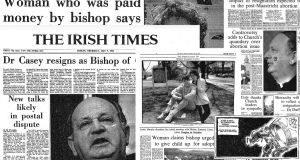 'The Irish Times' coverage of Eamonn Casey From the first front page; some of the 1992 headlines about the bishop's resignation

“He was dynamic. He had this ability at meetings to get to the core of things while the rest of us were dealing with the periphery.”

A major conference was organised in Galway with John Hume as main speaker.

It was a launching pad for Developing the West Together. “We were going to call it ‘Saving the West’ but he [Bishop Casey] thought that too negative.”

It was supported by bishops of all western dioceses and Raphoe in Donegal as well as then Church of Ireland Bishop of Tuam John Neill.

This initial “huge drive” led to Bishop Kirby and five farmers appearing on RTÉ programmes such as Questions & Answers and the Late Late Show to discuss the plight of the west of Ireland.

A government-funded study was prepared and in 1994 its report, Crusade for Survival, was launched by then taoiseach Albert Reynolds in Castlebar.

It proposed the establishment of the Western Development Partnership Board (WDPB) and a voluntary Council for the West, as well as the appointment of a special minister for the region.

The WDPB evolved into the Western Development Commission which promotes economic and social regeneration in the region.

The bishops’ Developing the West Together evolved into the Council for the West, now based in Ballina, with the late Seán Hannick as a driving force.

“He didn’t want it to become a collection agency distributing goodies. He wanted it to challenge realities, to put pressure on governments and people to change the realities of life,” says Bishop Kirby.

The bishop also campaigned against violence in Mozambique and Angola.

“He believed it was being fermented by the South African government to take pressure off themselves.

“He supported the Dunnes Stores strikers in their campaign to boycott South African oranges. He was very much opposed to apartheid.”

This did not always go down well. “Some bishops wondered why Trócaire was getting involved in political agitation,” says Bishop Kirby.

Bishop Casey was 80 and in Shanaglish when he broke his leg.

“It was trapped by the tow bar at the back of a car and he spent a few weeks in hospital.”

“When he was able to drive he’d go into Gort four or five times a week, buy a paper, go into the Lady Gregory restaurant there and have lunch.”

“He developed a friendship with Robbie Marcus, who has a garage on the Old Ennis Road in Gort. They’d drink together locally, Eamonn on wine, Robbie with his two pints.”

Robin Marcus recalls those days. “We got on very well together, that’s for sure,” he says.

“His car gave up one Sunday and I was introduced to him. I was asked to try to sort him out . . . The relationship grew out of that.

“We understood one another. He liked to banter a lot. We’d watch Vincent Browne in his house when we returned from the pub.

“Sometimes we’d go for a meal with my wife and she’d drive. We’d usually drink too much – it was part of the bargain. We enjoyed the craic. By God he could sing.

“Many’s a time I was with him when people would come over and shake his hand. He was a great one to be with and said it like it is.

“And he fixed the old bell for them at Shanaglish, and paid for it himself. I could say nothing wrong about him. I brought him a lot of places. I brought him to the train in Galway.

“Sometimes he’d drive, a hairy experience. I preferred it when I did the driving.”

Marcus is a descendant of the Jewish Marcus family of Cork and a cousin of the late author and editor David Marcus and his brother film-maker Louis Marcus.

Robin’s mother was Catholic and his father had to change religion to marry her. It meant he was estranged from the family.

Through Bishop Casey and Fr Dermod McCarthy, former head of religious programmes at RTÉ, it was arranged for Robin to meet Louis in Dublin.

“We had a great chat, for hours. I never met David.”

“We’d go out and we’d bring the [wheel]chair as well. He was a brilliant, brilliant man. I’d great respect for him, great time for him.”

Bishop Kirby will be the main celebrant at Bishop Casey’s funeral Mass in Galway cathedral at 2 o’clock on Thursday afternoon.

The remains will arrive there at 7 o’clock on Wednesday evening.