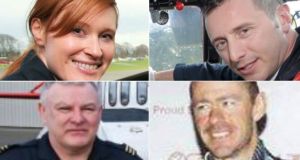 The search continues for three missing Irish Coast Guard crew members after it was confirmed Capt Dara Fitzpatrick has died, having been recovered from the sea following a helicopter crash off the Mayo coast.

Capt Dara Fitzpatrick (45) was pilot of the Dublin-based Sikorsky S-92 helicopter which went missing off the coast of Mayo in the early hours of Tuesday morning. She was found by the RNLI Achill lifeboat crew some hours after the helicopter went missing, but her condition was described as critical and she later succumbed to her injuries.

A native of Dublin, Capt Fitzpatrick had more than 20 years’ experience piloting helicopters. She was one of the first women to pilot an aircraft for the Irish Marine Emergency Services, precursor to the Coast Guard.

Initially stationed with the Shannon Search and Rescue team, she transferred to the Waterford base in 2002 where she became chief pilot for the Rescue 117 helicopter before switching to the Dublin Airport crew later in her career.

The mother of one also spent some time piloting flights to oil rigs in the North Sea, and was a member of the Coast Guard’s first all-female crew in 2013 which transferred a critically ill child from Cork University Hospital to Temple Street Children’s Hospital in Dublin.

She played a key role in several high-profile rescue missions over the last two decades, and received an award for rescuing a pilot whose plane crashed into the Irish Sea in 2010.

Capt Fitzpatrick also played an integral part in the retrieval of two fishermen just seconds before their trawler sank off the Wexford coast in 2007 and she featured in an RTÉ television series about the Coast Guard helicopter crew in Waterford in 2010.

A sister of Capt Fitzpatrick expressed the family’s devastation in a tweet posted on Tuesday afternoon. “My brave sister Capt Dara Fitzpatrick lost her life in #Rescue116 crash. We are devastated. Please pray for recovery of 3 remaining crew,” said Niamh Fitzpatrick.

A native of Dundalk, Mr Duffy later moved to the nearby seaside village of Blackrock where he shares a home with his wife Hermione and two children.

He began flying rescue missions for the Dublin-based crew in 2002.

He previously worked with the California Coast Guard in San Francisco for seven years after doing his training in the US.

He went on to pilot helicopters in the west of Ireland before later landing what was described as his “dream job” with the Irish Coast Guard, which allowed him to move back to Louth.

According to local sources and newspaper accounts, Mr Duffy was known for his community work on behalf of the Coast Guard which the community of Blackrock is “very proud of”.

He regularly engaged in visits to local schools, including his alma mater of St Mary’s College (The Marist) in Dundalk.

Ciarán Smith (late 30s), a winchman on the Rescue 116 helicopter, is among the three crew members still missing.

A former corporal and winchman with the Air Corps, he is from Oldtown in north Co Dublin and has worked on rescue teams for over 15 years.

He was awarded a Marine Bronze Medal for Meritorious Service in 2004 for his part in the rescue of a man off the coast of Co Antrim the previous year. The bravery demonstrated by himself and his fellow Air Corps crew members was also recognised in a ministerial letter.

In another noted case in 2003, he was lowered on to the deck of a sinking trawler off the coast of Co Sligo and remained with its three stranded crew members for half an hour before they could be moved to safety.

Known for his love of cycling, he completed various tours of Ireland in aid of charity over recent years, raising funds for the Aoibheann’s Pink Tie cancer appeal.

His wife Martina and three young children are believed to have travelled to the site of the search and rescue mission in Blacksod.

Speaking to The Irish Times, a family friend described him as “a great guy, just an absolute gent in every sense of the word –a great dad and a great husband”.

Described as a man dedicated to his work and the Coast Guard, Paul Ormsby from north Dublin is an experienced helicopter winch operator whose service record stretches over a number of decades.

He received commendations for his part in the rescue of 17 Spanish and Portuguese sailors who got into difficulty off the coast of Clare in 2000.

His rescue team winched 13 of the sailors from their stricken vessel before depositing them safely in the nearby Shannon base, and all crew were later congratulated by then minister for the marine Frank Fahey.

Mr Ormsby was the longest-serving Dublin-based rescue worker of the four-person crew on the crashed S-92 Sikorsky helicopter.