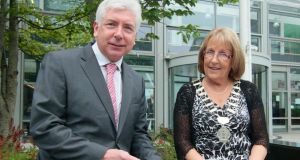 Alex White TD, Minister of State at the Department of Health with responsibility for Primary Care, with Anne Corridan, president of the Institute of Community Health Nursing at the International Public Health Nursing Conference in Galway yesterday. Photograph: Mike Shaughnessy

It took 20 years for research aimed at preventing cot deaths to be put into practice, and the volume of medical research now being published could make such delays even greater, a conference has heard in Galway.

One medical paper is being published every minute in an international scientific journal, but much of it cannot be accessed by those who could benefit most, researcher Dr Sinead Hanafin told the International Public Health Nursing Conference in Galway yesterday.

Cot deaths
Dr Hanafin, who is visiting research fellow at Trinity College Dublin’s school of nursing, recalled how a longitudinal study in the 1970s in Dunedin, New Zealand, had found that putting babies on their backs rather than on their stomachs could help to prevent cot deaths.

However, by the time it was put into practice internationally in the 1990s, an estimated 10,000 more babies had died, she said.
It was impossible for frontline clinicians and medical staff to keep abreast of evidence-based material, due to their own workloads, the quantity of material appearing, and the inability of authors to communicate key findings, she said.

The PubMed free medical database has 20 million papers, and volume grew by 3.8 per cent last year, she said.

Dr Hanafin, who is a nurse, midwife and formerly head of research at the Department of Children and Youth Affairs, said that evidence-based information has to be made more accessible and readable, with summaries of key points included for practitioners and policy-makers.

She said that the Health Service Executive library was excellent, but physical access was a difficulty for staff under pressure. There was a need for capacity building, providing broadband communication and giving relevant trained staff time to download and read relevant material.

Community and public health nurses were postgraduates, she pointed out, but were providing a “service without a wall”, she said, and they needed such supports to ensure best practice was being applied.