‘Citizen’ archaeologists to be recruited after Spanish Armada finds 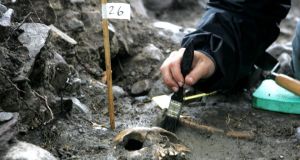 The battering of the west coast last winter and this winter’s tides have exposed many artefacts. Photograph: Cyril Byrne

“Citizen” archaeologists are to be recruited in a pilot project which aims to protect vulnerable coastal heritage from being lost to winter storms and climate change.

Recent discoveries of Spanish Armada timbers off Streedagh, Co Sligo, and ancient drowned forests in Connemara demonstrate the value of community action, according to archaeology lecturer Dr James Bonsall of the Institute of Technology (IT) Sligo.

The battering of the west coast last winter and this winter’s tides have exposed many artefacts at an overwhelming rate and at a time of scarce State resources to record and respond,he said.

Just days after the Armada timbers were exposed by severely low tides in Sligo – the lowest tidal range in 18 years – timbers from a large ship were also found off Lissadell.

Students and staff from IT Sligo have been involved in several other recent discoveries, including a peat shelf formed from drowned forests at Ardtarmon strand, Co Sligo, which could date back to the Iron Age or earlier.

“Boulder-size” pieces of the peat have been eroded and rolled by waves into large balls, and the shelf is exposed for some 124 metres along the strand, according to Dr Bonsall.

His colleague Dr Fiona Beglane has been monitoring the rate of erosion at Staad medieval church near Grange, where more than 10 metres of land has been taken by the sea in the last century.

The Atlantic is now less than four metres from the building, and archaeology is “being washed into the sea with every high tide”, said Dr Beglane. She forecasts the church itself could be lost within a decade.

She is due to speak at a conference on “weather-beaten archaeology” hosted by IT Sligo on Saturday, which aims to initiate a new project involving the community.

Birdwatchers, dog walkers, beach combers and coastal surveyors are to be recruited for the “Monitoring archaeology on Sligo’s coastline” (MASC) initiative, which aims to help record vulnerable artefacts.

“People are often not sure of what they’ve found, and the idea is to raise awareness and to ensure that anything valuable is recorded and is preserved as quickly as possible,” said Dr Bonsall.

He says that other countries such as Scotland, France and Canada have been establishing citizen science schemes to map vulnerable sites. Experts from these areas will also contribute to the conference.

“We went to think that we have freak weather, but these ‘extreme’ events are becoming more common and will continue to do so with climate change,” Dr Bonsall said. “Gathering information is the key and then National Monuments Service does react quickly,” he said. “If our pilot project is successful, it could be rolled out across the State.”

Archaeologists, geologists, meteorologists, government policymakers, botanists, historians and commentators from Ireland, along with Britain, France, Iceland and Canada, will attend the conference. It is the first of its kind, according to Dr Bonsall, and takes place at IT Sligo on March 7th and 8th.