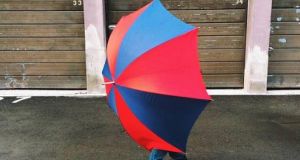 The winds were forecast to ease countrywide as the day went on, with some showers, and even hail and sleet, predicted. File photograph: Getty

Wrap up and bring your brolly is the advice from forecasters for the hundreds of thousands expected to brave wet and windy conditions over St Patrick’s Day weekend.

As gusts reached gale force in areas on Saturday, a planned céilí mór in Dublin’s Merrion Square had to be postponed “due to high winds”.

Organisers say it is being rescheduled for Monday, when the worst of the unsettled weather should have passed.

Kerryann Conway, spokeswoman for the five-day St Patrick’s Festival centred in the capital, said all other events are going ahead as planned “as of now”, including the acrobatic Tumble Circus and the World Food Market.

But the winds were forecast to ease countrywide as the day went on, with some showers, and even hail and sleet, predicted. Snow showers could affect some areas overnight – mainly in the west of the country.

St Patrick’s Day is expected to be bright and breezy, but with scattered showers becoming more widespread in the afternoon.

Temperatures are forecast to reach between 7 and 9 degrees, but with the airflow coming from the west to northwest it may feel colder, said Ms Gavin.

“People should wrap up and bring the brolly, because there will be showers around,” she said.

Bank holiday Monday should be drier with some patchy rain, again mostly affecting the west of the country, while the outlook for the rest of the week is for more dry weather.