Cheltenham: Double on the day for Michael O’Leary 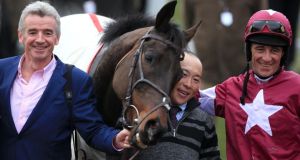 Ahead of Thursday’s big race which he sponsors, Ryanair chief executive Michael O’Leary got off the mark with two winners. First Don Poli, one of the stars of Gigginstown House Stud, justified his favourite status in the second race of the second day at Cheltenham, the RSA Chase.

It was another victory for that man Willie Mullins, the trainer’s fifth win of the festival.

“He’s a genius,” exclaimed O’Leary. “Getting a winner at Cheltenham is incredibly difficult to come by unless you’re JP [McManus] or Willie Mullins.”

While Don Poli brought a cheer to punters on a day when favourites struggled, Rivage D’Or’s win in the Glenfarclas Cross Country was a surprise. It was a two from two for its jockey Davy Russell, O’Leary’s former retained rider who also took the opening race, the Neptune Investment Management Novices’ Hurdle on Windsor Park.

Rivage D’Or, the 16/1 shot, was a “complete Hail Mary,” O’Leary said. “Talk about a bonus. We tried to sell him last September and he got sent back by the vet. It’s not a race series that I would buy horses for.”

There was drama in that race too when the well-placed Quantitativeeasing, ridden by Nina Carberry, and the French horse Toutancamont, crashed through the rails near the finish line and hit Irish-based racing photographer Patrick McCann. McCann, who works for The Racing Post, was taken to hospital with a suspected broken leg.

The day belonged to English trainer Paul Nicholls as much as the opening day of the festival belonged to Willie Mullins. Nicholls had three winners including Dodging Bullets who won the big race of the day, the Queen Mother Champion Chase to the muted cheers of the crowd as the anticipated showdown between favourites Sprinter Sacre and Sire De Grugy never materialised.

There was an Irish victor on Ladies Day too. Jennifer Wrynne (25) from Mohill, Co Leitrim, won a £15,000 (€21,000) first prize from Boodle’s and was astonished and not a little bit surprised to win. “I wasn’t even sure how the whole Ladies Day thing worked,” she said.

The Wrynnes had been travelling to Cheltenham for many years as they have a family interest in the hugely successful mare Quevaga.

The win is a timely boost to Ms Wrynne’s career as a milliner. She is based out of Ballinamore, Co Leitrim.

She made the hat herself from raspberry silk and lace. The striking green dress was from Covet in the Powerscourt Town Centre, the fur wrap from a vintage shop in Paris and the shoes were from Jimmy Choo.

Among those enjoying the hospitality in the Guinness tent was the Welsh rugby coach Warren Gatland. He was joined by several of the coaching squad and a few fringe players.