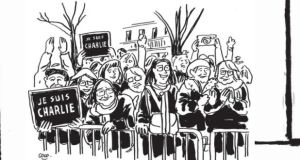 Irish residents hoping to purchase this week’s Charlie Hebdo will struggle to pick up a copy of the satirical magazine as it seems no retailers here will stock it.

Although media reports on Wednesday suggested Eason would sell the magazine, a statement from the company later read: “Eason has never stocked the French magazine Charlie Hebdo and has no plans to in the future.”

A member of staff at the O’Connell Street, Dublin, branch said an email had been sent to workers at the company informing them the shop would not be sellign the magazine. She said an Eason spokesman had been “misquoted” in a newspaper newspaper report which said the retailer would have Charlie Hebdo in stock on Friday.

A spokesman for the Musgrave group, which includes Supervalu, Centra and Londis, said they would not be selling the magazine. It was a similar story at Fallon & Byrne, a Dublin city food hall which stocks some specialist magazines.

The Alliance Francaise cultural centre in Dublin said, based on their inquiries, there is no where in the State to purchase a copy of the magazine. A spokesman there said some members of staff were asking relatives in France to buy them a copy.

He added that the centre would be taking out a subscription with the magazine so members will be able to read it in the library there, but they won’t be allowed take it home.

Charlie Hebdo usually has a print run of about 60,000 but following the murder of senior members of its editorial staff by Islamic fundamentalists last week that was increased to 3 million for a special “survivors’ issue”.

The print run was further increased to 5 million after newsagents in France sold out of stocks within minutes of it going on sale on Wednesday.

According to a report in the Guardian, about 1,000 copies of the magazine will be available in the UK on Friday. But the paper said these are likely to be availble only from specialist shops such as the French Bookshop in South Kensington, London.