Bird, once a soundtrack to the early summer, now confined to limited number of areas 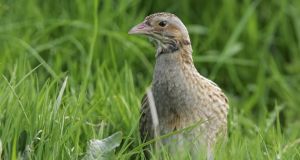 The latest report of the Corncrake Conservation Project indicates that the number of calling males in Ireland last year was 151, up 11 on the previous year. File image: Andy Hay/RSPB/PA Wire.

One swallow does not a summer make; neither does a modest annual increase in the number of corncrakes after years of decline.

The 8 per cent increase reversed four years of previous decline though numbers are nowhere near what they were before intensive farming took hold in Ireland in the 1980s.

Sightings remain concentrated in fringe area of Donegal and west Connacht. There are still no corncrakes in the Shannon Callows area around Offaly and Tipperary.

National Parks and Wildlife Service divisional manager Denis Strong remains optimistic about the future of this bird, whose unique rasping sound used to be the soundtrack for early summer in rural Ireland.

“We won’t be popping open the champagne just yet. I hope it is not just a one-off,” he said. “We got lucky with the weather.”

Corncrakes arrive in Ireland in April. They appeared last year after one of the coldest winters in recent years. Fortunately their remaining Irish habitats in the west and north-west escaped the worst of the snow and ice.

The weather was sufficiently clement for growth of nettle plants and yellow-flag iris, their chosen vegetation but weeds to the rest of us, to give corncrakes cover from predators. This was followed by a hot summer which benefited the birds as farmers did not feel the need to mow their meadows early.

Female corncrakes hatch in meadows in July. The rapid decline in the corncrake population is down to their numbers being wiped out by fast-moving mowing machines.

“It gave us a longer growing season for vegetation,” Mr Strong said. “When there is a long forecast of good weather, the farmers are not under pressure to save their crops when we have seen very wet summers in recent years.”

However, he cautioned that the increase in numbers may also be down to better census data. Benign sea conditions made it easier to visit remote islands where the corncrake nests and if the weather is stormy or wet, male birds tend not to call.

“If you have lovely balmy night, they will call away to their hearts content,” he explained. “We delivered the census in full. There is a possibility that birds were underrecorded in previous years.”

Some 125 farmers participated in the Corncrake Grant Scheme at a cost of €118,000. The purpose of the scheme is to compensate farmers for creating habitats for corncrakes. Participating farmers also leave the cutting of meadows until late summer to allow the corncrake to breed.

Numbers remain precarious, but Mr Strong says he is “always optimistic” about the future of the corncrake and can even see them returning to the Shannon Callows.

He also said that corncrakes are genetically programmed to return to the place where they were born so if more are born in Ireland, the number returning will grow in future years.

So, is the future bright for the corncrake?

“I don’t even want to think about that. I’ve invested too much of my life into keeping them here. There is a greater awareness and that all helps,” Mr Strong said.

“You really have to gauge long-term trends,” she said. “I would like to think that the threat of extinction in Ireland is diminishing, but there is still a long way to go to secure the population.”

Ms Donaghy said Government commitment to the long-term conservation of the corncrake is vital, and that the price of protecting them is worth it.

“Older people especially have a great fondness for the corncrake. They bring back lovely memories from youth when they were far more plentiful than they are now,” she added. “It’s sad that so many young people growing up in Ireland don’t even know the sound of the corncrake.”