Castletownbere-based tug on way to search for missing Mayo airmen

Boat will lift five-tonne part of the helicopter, aided by camera, in search for the two men 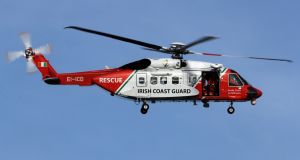 An Irish Coast Guard helicopter at Blacksod, Co Mayo in the search for the missing men. Photograph: Chris Radburn/PA Wire

West Cork-based tug Ocean Challenger is on its way to north Mayo to help with the search for two airmen still missing from the Irish Coast Guard Rescue 116 helicopter.

The 35m tug is owned by Atlantic Towage and Marine of Bere Island, which recovered the €18 million racing yacht Rambler 100 after it capsized off the Fastnet rock in 2011, and the tall ship Astrid which ran up on rocks off Kinsale, Co Cork in 2013.

It left Castletownbere, Co Cork on Thursday night and is due off the Mayo coast early on Friday afternoon.

Agencies involved in the air, sea, sub-sea and shore search, now in its third week, are still hoping that Irish Coast Guard winch operator Paul Ormsby (53) and winchman Ciarán Smith (38) can be located.

Senior pilot Capt Dara Fitzpatrick (45) was recovered from the sea and died within hours of the Dublin-based Sikorsky S-92 helicopter crash in the early hours of March 14th off Blackrock Island, 13km west of north Mayo.

The body of her co-pilot Capt Mark Duffy (51) was recovered from the helicopter’s cockpit last Sunday by the Naval Service dive team.

Naval Service and Garda divers will work with the ocean-going tug, which will position itself over the wreck site 40m below a narrow and turbulent channel separating Blackrock island and Parrot rock.

The tug will undertake a direct lift of a section estimated to weigh five tonnes, rather than using airbag flotation which proved too difficult to work in an area of spring tides, currents and swell.

The Marine Institute’s remotely operated vehicle (ROV), deployed from Irish Lights ship Granuaile, will monitor the lift in “real time” with a high-definition camera, and it will inspect the site for any signs of the two airmen.

The Lost at Sea Tragedies (Last) group, which is chaired by fishing vessel owner Caitlín Uí Aodha, has offered support for the search and recovery effort.

Ms Uí Aodha, whose husband Michael died in the Tit Bonhomme sinking in west Cork in 2012, said the fishing industry appreciated the work which the Irish Coast Guard undertook, and also recognised the importance of recovering loved ones.

“The Irish Coast Guard is there for us, and we would like to return this, and offer any support required to local fishermen who are assisting,”Ms Uí Aodha told The Irish Times.

RNLI lifeboat volunteers have also travelled from Donaghadee, Co Down;Valentia, Co Kerry; and Rosslare, Co Wexford to crew the Mayo, Achill, Ballyglass, Sligo and Bundoran lifeboats which were at sea on Thursday.

The lift by the Ocean Challenger is expected to take place over the weekend, weather permitting, and the first stage in a “two-stage process” will involve a sub-sea inspection by rotating or moving the wreck.

Only after that will a decision be made to bring the wreckage to the surface, Mr O’Flynn said.

The Irish Coast Guard has reiterated that safety is paramount. Two club divers lost their lives in separate rescue and recovery incidents in the past: Michael Heffernan during the Belderg cave rescue in north Mayo in October 1997, and Billy O’Connor while searching for the skipper of a fishing vessel off the Wexford coast in 2005. Irish Coast Guard Doolin volunteer Caitríona Lucas lost her life during the search for a missing man off the Clare coast last September.