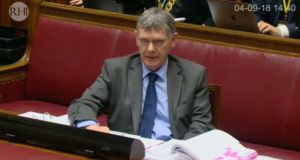 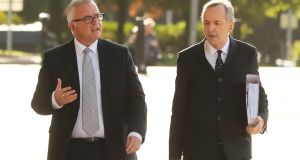 As well as his oral evidence, Dr McCormick also provided more than 1,100 pages of written evidence, documentation and annexes.

It was heavy going wading through all that material. Dr McCormick admitted to a tendency to “prolixity” – the chairman of the inquiry, Sir Patrick Coghlin said he could “make the law look simple” – but when he finally finished his discursive testimony on Tuesday evening a picture emerged of political and official ineptitude – if not worse – together with petty political infighting and jealousies.

That was compounded by the written and oral evidence to the inquiry from Mr Bell who referred to quarrels with his former special adviser Timothy Cairns and what he believed was a concerted attempt to smear him over the RHI fiasco.

The RHI scheme was introduced by the Department of Enterprise, Trade and Investment (DETI) in 2012 when Arlene Foster was its minister. It wasn’t until May 2015 when the DUP’s Jonathan Bell was minister and Dr McCormick was its permanent secretary that anxieties started to ring.

It was finally twigged that unlike the scheme in England and Wales there was no cap on subsidies in Northern Ireland and that this official and political blunder could land the Northern Ireland taxpayer with a £490 million bill. This despite the fact that between 2013 and 2015 whistleblower Janette O’Hagan made a number of fruitless attempts to warn politicians and civil servants that the “more you burn, the more you earn” scheme really was, as Dr McCormick acknowledged, a “catastrophe”.

Attempts were made to cap the scheme in the summer of 2015, but the corrections did not happen until November, which allowed for a spike in applications that will greatly add to the overspend.

In April Dr Andrew Crawford, a special adviser to Ms Foster when she was at DETI and in the Department of Finance, admitted to the inquiry that he had inappropriately passed on information about the scheme to a number of relatives.

Evidence also was given this week by Dr McCormick of allegations that Dr Crawford was a “prime mover” in delaying the implementation of the cost controls and that Timothy Johnston, then the party’s special adviser to the then First Minister Arlene Foster and now chief executive of the DUP, “had also been involved” in the hold-up.

Jonathan Bell in an interview with BBC’s Stephen Nolan blew the whistle on the RHI catastrophe on December 15th, 2016. But, the inquiry learned, ahead of that interview and much to the annoyance of the civil servant, Mr Bell secretly recorded Dr McCormick to try to “establish the credibility of his (Mr Bell’s) stance in going to the BBC”. Mr Bell also secretly recorded DUP Upper Bann Assembly member Carla Lockhart, the inquiry learned.

Dr McCormick also in his written evidence said he was “very surprised” that as part of that BBC exposé Ms Foster responded “to the effect that she had no idea” about the possible special adviser involvement in delaying the implementation of cost controls.

These are some of the serious claims the inquiry is exploring. But also there were elements of farce about some of the evidence this week.

For instance we learned of Jonathan Bell’s anger at not being invited to meet the then mayor of London Boris Johnson when he visited Wrightbus in Ballymena in 2016 and how some of Dr McCormick’s time was taken up in trying to dissuade Mr Bell from pushing for an official investigation into the snub.

There also were allegations that Mr Bell threw a punch at his DUP special adviser Timothy Cairns and tried to break his finger. Mr Bell said the incident never happened and was part of a “massive smear” against him. It also appeared during the week that unelected DUP special ministerial advisers yielded more power than the elected Ministers, a point reflected in how Mr Cairns felt empowered in a confrontation with Mr Bell to declare to him, “Now you’re going to listen to me big balls.”

Through Dr McCormick it was also clear that civil servants did not have a high opinion of Mr Bell’s capabilities. There was reference to “several awkward incidents” during a trade and jobs-seeking mission to the United States in January 2016 and how after a late night dinner and drinks the Minister was in too “tired” a state to perform constructively at a meeting the following day, and how there was great official relief when Mr Bell two months later was bumped off a second mission to the US on St Patrick’s week.

Regularly during the three days of evidence the inquiry chairman Sir Patrick Coghlin expressed astonishment about the whole debacle, as well as appearing to be amazed that special advisers to Ministers should have so much power.

He also displayed incredulity that there was no written record of who decided not to pull the reins on the highly lucrative but disastrous scheme.