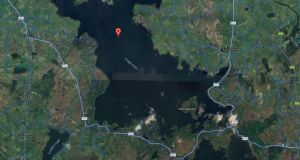 A canoeist has had a narrow escape after four hours in a lake after two 10-year-old children he had been out with made it ashore to raise the alarm.

His survival in Lough Conn in Co Mayo was partly due to wearing a life jacket. A Coast Guard member said colder water a little later in the year would have made it a lot less likely.

A major search operation was launched including local boats and a Coast Guard helicopter, and continued for an hour of darkness until the man was spotted at about 10pm. Lough Conn measures approximately 5km by 10km.

The man entered the water at Massbrook at about 6pm. A short time later, the two children came ashore at Knockmore to the northeast and raised the alarm. It is not known if the man is their father, or how he ended up in the water.

The Killala Coast Guard unit, with the assistance of local boats, scrambled to find him, as did the Co Sligo-based helicopter, which was able to shine lights into the dark water.

He was recovered in good physical condition, although with mild hypothermia, and taken to Mayo General Hospital for treatment.